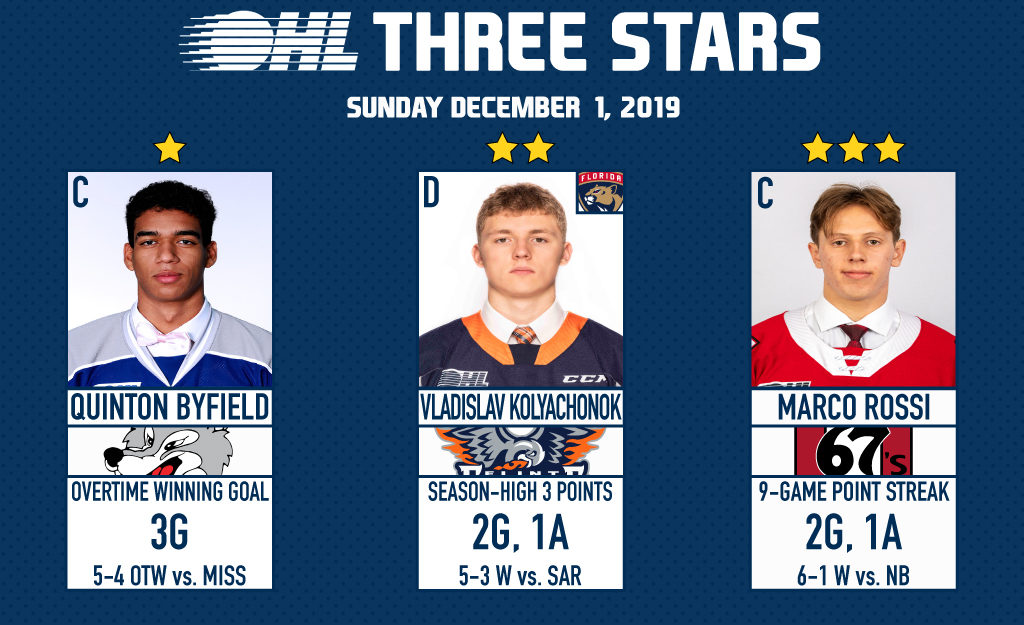 1ST STAR: QUINTON BYFIELD (SUDBURY WOLVES) – 3G
Quinton Byfield recorded two milestones Sunday afternoon as he earned his first career OHL hat-trick in a 5-4 overtime win over the Mississauga Steelheads and reached point number 50 (20-30–50) on the year. The 6-foot-4 Newmarket, Ont. native scored both the game opener and OT winner in Sunday’s tilt, and now sits fourth in OHL scoring. Byfield, who was drafted first overall by the Wolves in 2018, is expected to be a high pick in the upcoming 2020 NHL Draft.
• HIGHLIGHTS

2ND STAR: VLADISLAV KOLYACHONOK (FLINT FIREBIRDS) – 2G, 1A
Florida Panthers prospect Vladislav Kolyachonok had an impressive three-point (2-1-3) night in his squad’s 5-3 victory over the Sarnia Sting. The six-foot-one defenceman from Minsk, Belarus now has 17 points (8-9–17) through 26 games with the Flint Firebirds this season. Drafted by the London Knights in the second round of the 2018 CHL Import Draft, Kolyachonok played one game with London before heading to Flint in his rookie season, where he picked up 29 points (4-25-29) through 53 games. The 190lb. defenceman heard his named called by the Panthers last June in the second round of the 2019 NHL Draft.
• HIGHLIGHTS

3RD STAR: MARCO ROSSI (OTTAWA 67’S) – 2G, 1A
Leading Ottawa scorer Marco Rossi has been no stranger to multi-point games in the season leading up to the 2020 NHL Draft, where it’s expected his services will be highly sought after. Rossi registered two goals and an assist in Ottawa’s 6-1 win against the North Bay Battalion Sunday afternoon in front of a home crowd and lifted his point total to 49, which currently places him fifth in the OHL scoring race. The Feldkirch, Austria native now has 23 points (11-12-23) in nine straight games and has picked up three or more points in eight games so far this season.
• HIGHLIGHTS