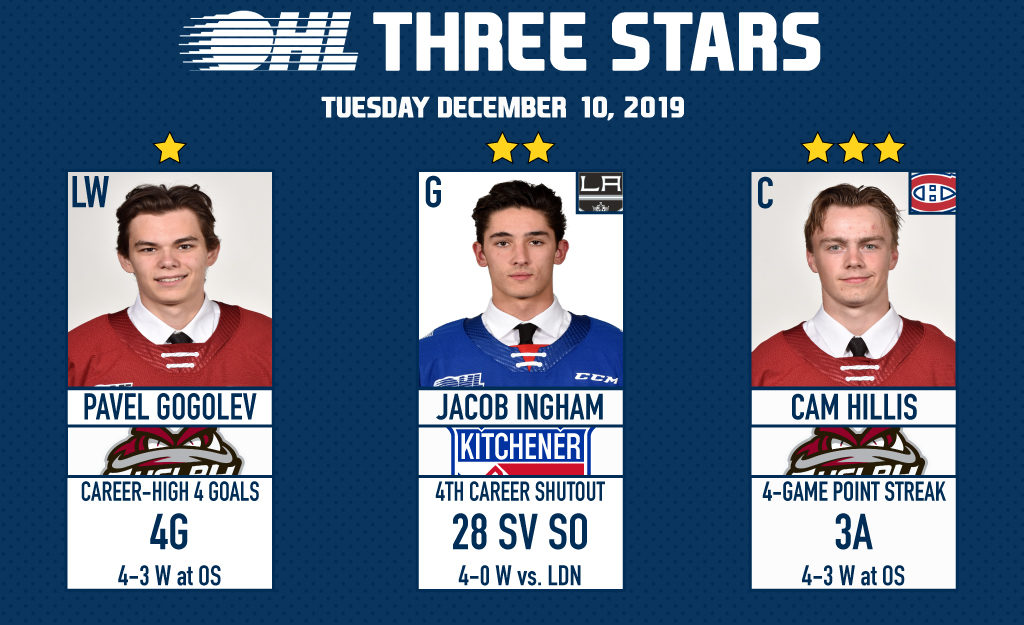 1ST STAR: PAVEL GOGOLEV (GUELPH STORM) – 4G
Pavel Gogolev scored all four goals in his team’s 4-3 victory in Owen Sound, a career-high feat for the fourth-year OHLer. Gogolev recorded his 20th goal of the season, placing him seventh in both goals and points (20-26-46) among all OHL skaters. The Moscow-born winger is one point shy of tying his career-high 47 points, a total he reached during the 2017-2018 season as a member of the Peterborough Petes. Drafted eighth overall by the Petes in 2016, Gogolev was acquired by the Storm last December. He attended rookie camp with the Vegas Golden Knights in September.
• HIGHLIGHTS

2ND STAR: JACOB INGHAM (KITCHENER RANGERS) – 28 SV SO
Kitchener’s 4-0 blanking of the London Knights earned Jacob Ingham his fourth career OHL shutout and first shutout with the Rangers, having joined the squad in the offseason after three seasons with the Mississauga Steelheads. Ingham made 28 saves in what would be the Rangers’ seventh win in a row. The 19-year-old netminder was a sixth-round draft pick of the L.A. Kings in 2018 and boasts a .919 save percentage and 2.88 goals against average with Kitchener through 17 games, having been sidelined with an injury throughout most of November.
• HIGHLIGHTS

3RD STAR: CAM HILLIS (GUELPH STORM) – 3A
Guelph Storm captain Cam Hillis put up three assists as his team blew past the Owen Sound Attack in a 4-3 road victory behind four goals from Pavel Gogolev. The 19-year-old from Enniskillen, Ont. has posted 42-points (10-32-42) so far in his third year with the Storm, placing him second in Storm scoring and 12th among OHL scorers. Hillis was picked up in the third round of the 2018 NHL Draft by the Montreal Canadiens and is on pace to blow past his career-high 59 points, a feat he accomplished during the 2017-2018 season.
• HIGHLIGHTS