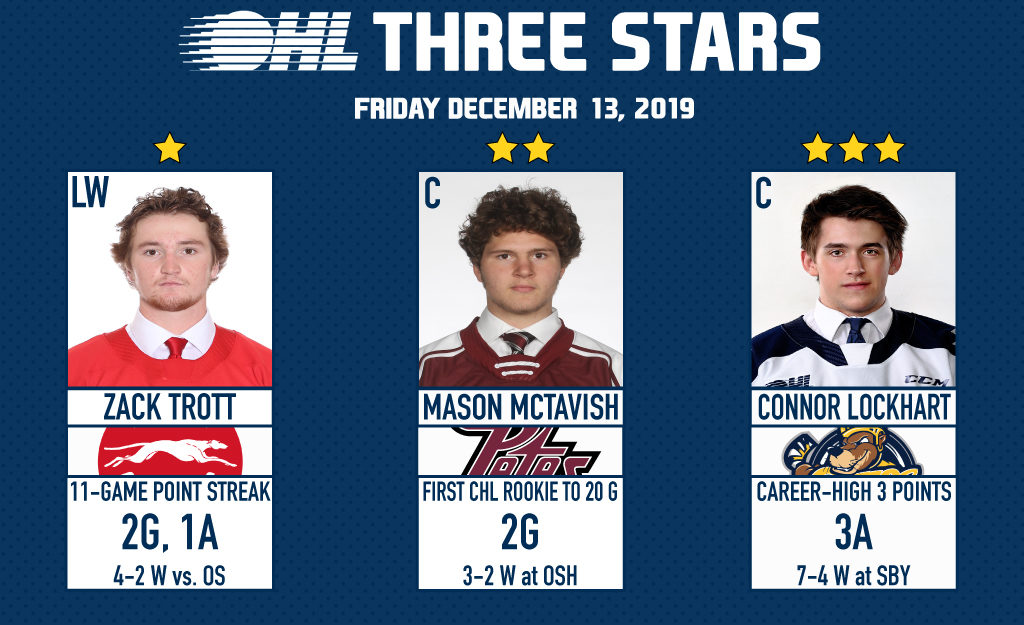 1ST STAR: ZACK TROTT (SOO GREYHOUNDS) – 2G, 1A
Zack Trott had two goals and an assist as the Soo Greyhounds skated to their fifth straight win, defeating visiting Owen Sound 4-2. Trott scored the game winner 6:40 into the second period, picking up one of his two power play goals on the night to give him 11 tallies on the season and a total of 31 points (11-20–31) in 30 contests. The 19-year-old native of Honeywood, Ont. is on a current 11-game point streak. Trott is in his third OHL season after being a 14th round pick by the Hounds in the 2016 OHL Priority Selection.
• HIGHLIGHTS

2ND STAR: MASON MCTAVISH (PETERBOROUGH PETES) – 2G
Peterborough Petes 16-year-old rookie Mason McTavish became the first CHL rookie to hit 20 goals on the campaign, helping the Petes defeat rival Oshawa 3-2 on the road. McTavish buried the winner with 3:55 remaining in the second period as the Petes powered to their third straight win and an OHL-best 23-7-1-1 record. The fifth overall pick of the 2019 OHL Priority Selection, McTavish sits second in OHL rookie scoring with 26 points (20-6–26) over 27 contests. The Pembroke, Ont. native has five goals over his last two games.
• HIGHLIGHTS

3RD STAR: CONNOR LOCKHART (ERIE OTTERS) – 3A
Erie Otters rookie Connor Lockhart registered three primary assists as his team broke out of a six-game funk, defeating the Sudbury Wolves 7-4 on the road. Lockhart’s three points mark a season-high, giving him 12 (2-10–12) over 26 games this season. The Kanata, Ont. native was the third overall pick of the 2019 OHL Priority Selection. He represented Canada Red at the 2019 World Under-17 Hockey Challenge.
• HIGHLIGHTS