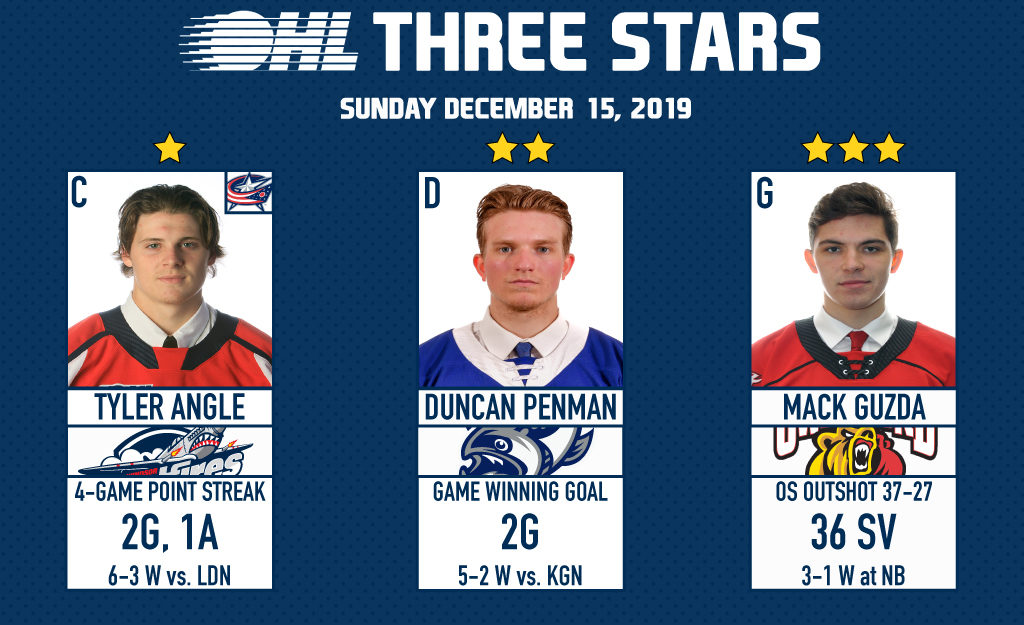 1ST STAR: TYLER ANGLE (WINDSOR SPITFIRES) – 2G, 1A
Tyler Angle led the Spitfires in their big 6-3 home victory over the London Knights with two goals and an assist, his third three-point night so far this season. The 5-foot-10 winger’s first on the night came 4:07 into the game, and his second came within six minutes, capping off an early 4-0 advantage. The Thorold, Ont. native leads his team in scoring with 35 points (18-17–35) through 28 games in his fourth year as a Spitfire. Angle was a seventh round pick of the Columbus Blue Jackets last summer.
• HIGHLIGHTS

2ND STAR: DUNCAN PENMAN (MISSISSAUGA STEELHEADS) – 2G
Blueliner Duncan Penman lit the lamp twice and finished with a plus-4 rating as the Mississauga Steelheads pushed past the Kingston Frontenacs 5-2. Penman’s second two-goal effort of the season came on six shots on goal as the 18-year-old now has 10 points (6-4–10) over 32 games this season. The Oakville, Ont. native joined the Steelheads midway through last season after originally being a second round (25th overall) pick of the Saginaw Spirit in the 2017 OHL Priority Selection.
• HIGHLIGHTS

3RD STAR: MACK GUZDA (OWEN SOUND ATTACK) – 36 SV
Mack Guzda turned aside 36 of the 37 shots he faced as the Owen Sound Attack defeated the North Bay Battalion in comeback fashion. Guzda stood tall, stopping 29 of 30 through the opening 40 minutes of play before the Bears took over with three unanswered goals in the third period. The 6-foot-5, 210Ib. native of Knoxville, Tenn. improves to 12-10-3-1 on the season with a 3.33 goals-against average and .901 save percentage. The 18-year-old is a back-to-back recipient of the OHL’s Ivan Tennant Memorial Award given to the league’s top academic high school student.
• HIGHLIGHTS