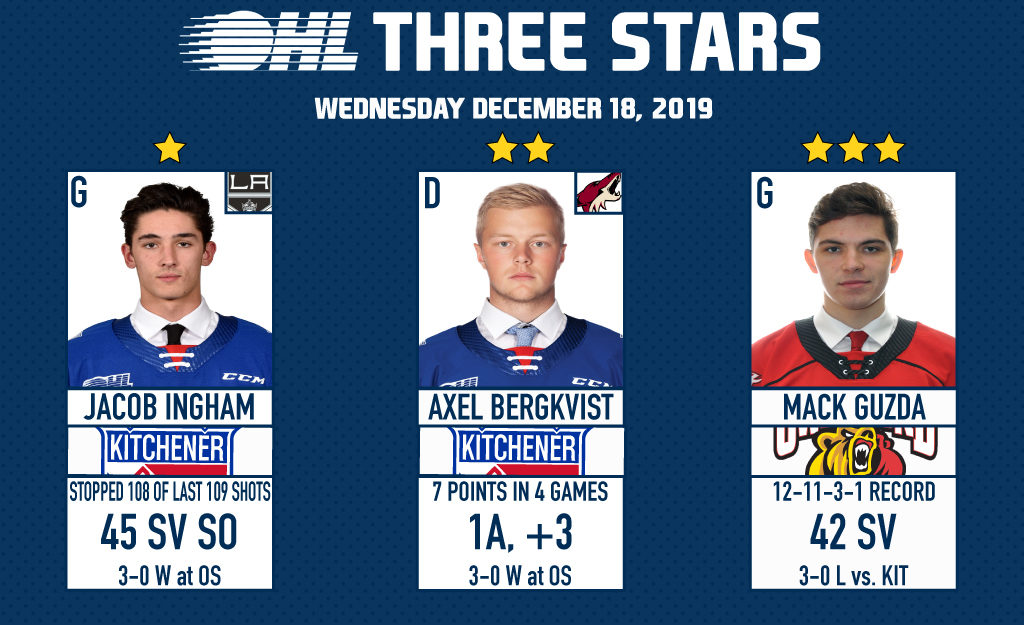 1ST STAR: JACOB INGHAM (KITCHENER RANGERS) – 45 SV SO
Jacob Ingham shut down all 45 shots in his team’s 3-0 win over the Owen Sound Attack for his second shutout in two games and fifth shutout of his OHL career. Wednesday’s win follows a 6-1 victory over the Guelph Storm and a 4-0 blanking of the London Knights the week before. Ingham has now faced over 40 shots in seven games this season, has stopped 108 of his last 109 shots faced, and currently holds a fourth-best .927 save percentage and 2.63 goals-against-average. The 19-year-old netminder from Barrie, Ont. was taken by the L.A. Kings in the sixth round of the 2018 NHL Draft, and spent his previous three seasons minding nets for the Mississauga Steelheads. Ingham is the reigning OHL ‘On the Run’ Player of the Week.

2ND STAR: AXEL BERGKVIST (KITCHENER RANGERS) – 1A
Kitchener Rangers rookie Axel Bergkvist picked up an assist in his team’s 3-0 Wednesday night win in Owen Sound. The Arizona Coyotes prospect’s helper came on captain Riley Damiani’s goal six minutes through the second period, lifting the Blueshirts up 2-0. Bergkvist was also a plus-3 on the night and now has seven points over his past four games. The Insjön, Sweden native now has 20 assists and two goals on the year for 22 points. Bergkvist was a second round selection of the Rangers at the 2019 CHL Import Draft and was a seventh round pick of the Coyotes last June at the 2019 NHL Draft.

3RD STAR: MACK GUZDA (OWEN SOUND ATTACK) – 42 SVS
His Owen Sound Attack fell 3-0 at the hands of the surging Kitchener Rangers, but goaltender Mack Guzda put up an impressive performance with 42 saves on 45 shots faced for a .933 save percentage. This is Guzda’s fifth time this season facing 40 shots or more. The 18-year-old boasts an overall .902 save percentage and 3.32 goals against average through 27 games in net for the Attack. A native of Knoxville, Tenn., Guzda was picked up by the Attack in the second round of the 2017 OHL Priority Selection, after playing with the Honeybaked U16 program.