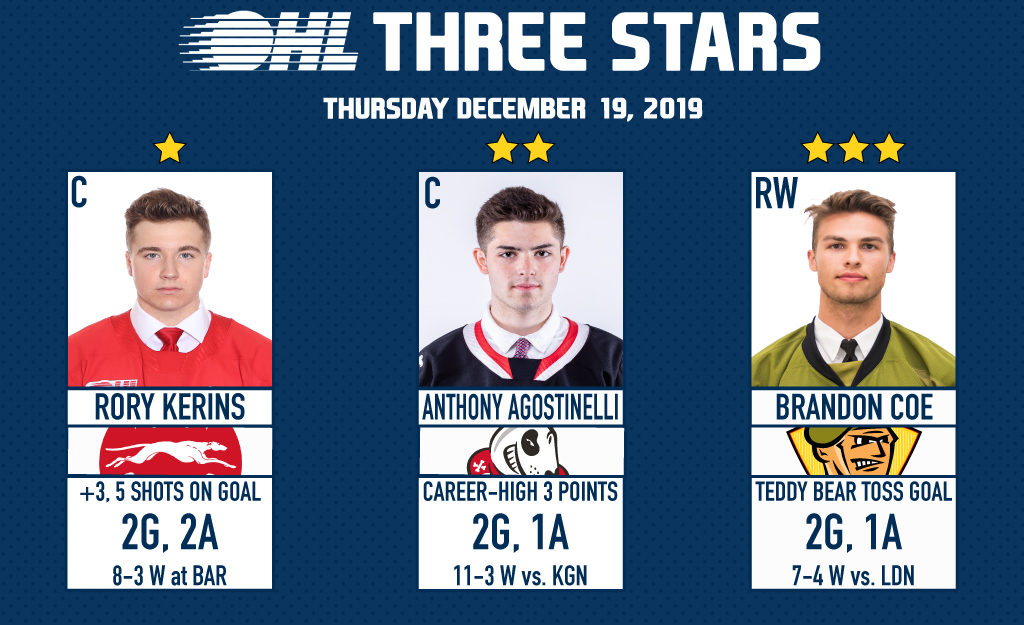 1ST STAR: RORY KERINS (SOO GREYHOUNDS) – 2G, 2A
Second-year Greyhound Rory Kerins completed his second four-point night of the season, nabbing two goals and two assists in the Soo’s 8-3 win over the Barrie Colts. Kerins scored at the eight minute mark of the first period to bring his Greyhounds up 2-0, and then 14:10 into the second, bringing the score 5-3. The 17-year-old centreman now boasts a third-best 33 point total (17-16-33) among Soo skaters.
• HIGHLIGHTS

2ND STAR: ANTHONY AGOSTINELLI (NIAGARA ICEDOGS) – 2G, 1A, 1st AND 2nd OHL GOALS
Rookie centreman Anthony Agostinelli saw a couple of firsts in his 18th game suiting up for the Niagara IceDogs: his first and second OHL goals, as well as his first three-point night. Agostinelli scored nearly 15 minutes into the game, boosting his team up to an early 5-0 lead. His second goal came at the 15:05 marker of the second period, lifting them up 8-1. He also notched an assist on rookie teammate Cameron Snow’s first OHL goal in the game’s remaining minutes.
• HIGHLIGHTS

3RD STAR: BRANDON COE (NORTH BAY BATTALION) – 2G, 1A
Brandon Coe extended his point streak to game number five with a three-point showing in North Bay’s big 7-4 win over the London Knights. He scored the big teddy bear goal to get the Troops up on the board, scored another to lift his team up 5-1, and picked up a helper on captain Brad Chenier’s second goal. Coe has now amassed 11 goals and 17 assists for 28 points through the first 30 games of his third season with the Battalion.
• HIGHLIGHTS