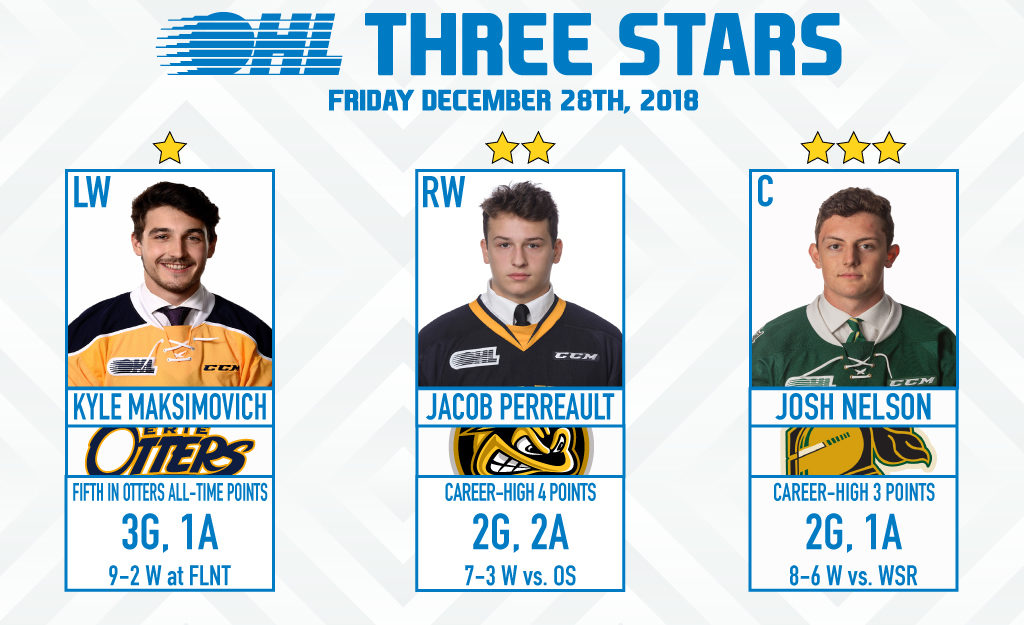 1ST STAR: KYLE MAKSIMOVICH (ERIE OTTERS):
Overage captain Kyle Maksimovich climbed into sole possession of fifth place on the Erie Otters’ all-time points list with three goals and an assist, powering a 9-2 road win over the Flint Firebirds. Maksimovich’s second hat-trick of the season, both coming against Flint, saw him score his 17th, 18th and 19th goals of the season, bringing his career total to 99 along with 271 career points. The 20-year-old from Hamilton, Ont. is a former OHL Champion and leads the Otters with 46 points (19-27–46) over 34 games. He’s currently riding a seven-game point streak.
• GAME HIGHLIGHTS

2ND STAR: JACOB PERREAULT (SARNIA STING):
Rookie sensation Jacob Perreault started the second half with a bang, netting two goals and two assists for a career-high four points in a 7-3 Sarnia Sting win over the visiting Owen Sound Attack. The 16-year-old from Hinsdale, Ill. put the Sting ahead for good 5:55 into the second period before adding the eventual game winner 12 seconds into the third, giving him 19 goals and 34 points in 31 games this season. Perreault is currently riding a nine-game point streak as he leads all OHL rookies in scoring. The 19th overall pick of the 2018 OHL Priority Selection, Perreault is a graduate of the Chicago Mission U16 program.
• GAME HIGHLIGHTS

3RD STAR: JOSH NELSON (LONDON KNIGHTS):
Third-year forward Josh Nelson gave the London Knights the extra offensive juice they needed to get past the visiting Windsor Spitfires in a high-scoring affair on Friday. Nelson scored twice and added an assist for a career-high three points as the Knights prevailed by a score of 8-6. Nelson scored his 10th and 11th goals of the season in London’s third straight win while also setting Liam Foudy up for his 15th goal of the season. A 19-year-old native of Lockport, Ill., Nelson is a former free agent signing by the Knights back in July 2016 from the Chicago Fury U18 program. Nelson has 18 points (11-7–18) through 29 games this season including points in seven of his last eight contests.
• GAME HIGHLIGHTS

2019-20 Recaps
Friday Highlights: Steelheads swimming up the Central
6 hours ago