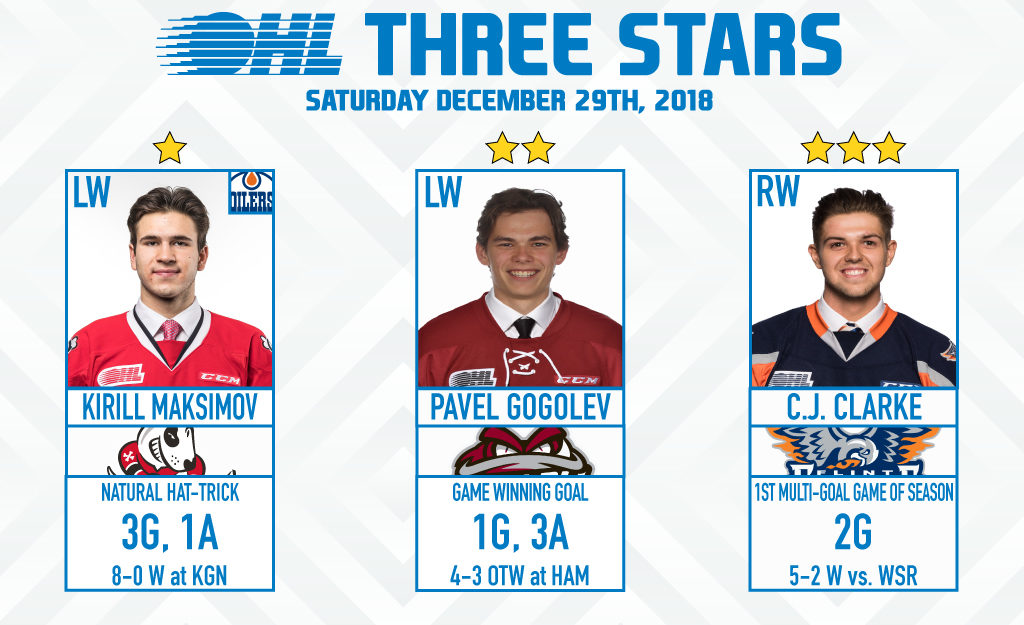 1ST STAR: KIRILL MAKSIMOV (NIAGARA ICEDOGS):
Edmonton Oilers prospect Kirill Maksimov scored a second period natural hat-trick in a span of 8:22, just over a minute shy of the pre-existing all-time franchise record as the Niagara IceDogs took an 8-0 win in Kingston. Maksimov’s 21st, 22nd and 23rd goals of the season give him 44 points (23-21–44) on the year as the IceDogs won for the eighth time in the past 10 games to continue leading the Central Division. The 19-year-old from Concord, Ont. has two hat-tricks this season. He was Edmonton’s fifth round pick in the 2017 NHL Draft.
• GAME HIGHLIGHTS

2ND STAR: PAVEL GOGOLEV (GUELPH STORM):
Pavel Gogolev was in on all four goals, scoring the overtime winner 1:51 into the extra frame to give the Guelph Storm a 4-3 win in Hamilton. Gogolev picked off a Bulldogs turnover to beat rookie Zach Roy up high and give the Storm a fifth straight win. Gogolev’s goal and three assists give him 27 points (10-17–27) over 33 games this season and eight (3-5–8) through his first four games in a Storm uniform. The 18-year-old from Moscow, Russia was Peterborough’s first round (8th overall) pick back in 2016. He attended training camp with the Detroit Red Wings this past September.
• GAME HIGHLIGHTS

3RD STAR: C.J. CLARKE (FLINT FIREBIRDS):
Fourth-year veteran C.J. Clarke opened the scoring with his fifth and sixth goals of the season, setting the stage for a 5-2 Flint Firebirds victory over visiting Windsor. Clarke’s first two-goal game of the season helped the Firebirds win their fifth game of the season, outshooting Windsor 36-23 in the process. Clarke has 11 points (6-5–11) over 37 games this season. The former second round pick of Peterborough back in 2015 has played in 212 career regular season contests, collecting 65 points (32-33–65) in the process.
• GAME HIGHLIGHTS