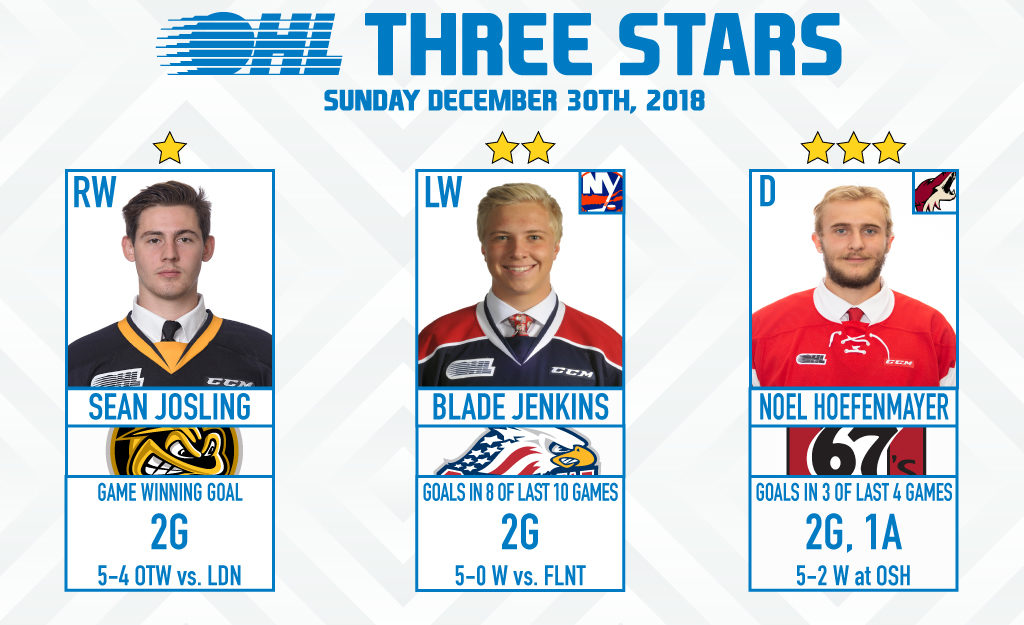 1ST STAR: SEAN JOSLING (SARNIA STING):
With his team down 4-3, Sean Josling tied the score midway through the third period before scoring the overtime winner 2:34 into the extra frame as the Sarnia Sting defeated visiting London 5-4 in the first of a New Years home-and-home set. Josling’s ninth and 10th goals of the season gave the Sting their seventh win in the past 10 games as the 19-year-old from Toronto, Ont. now has 27 points (10-17–27) over 32 games. Now in his third season with the Sting, Josling was originally a free agent signing by the club after winning a Telus Cup Midget AAA Championship with the North York Rangers in 2015-16.
• GAME HIGHLIGHTS

2ND STAR: BLADE JENKINS (SAGINAW SPIRIT):
New York Islanders prospect Blade Jenkins of the Saginaw Spirit wrapped up a solid month of December, scoring twice to lead the Saginaw Spirit past rival Flint 5-0 on home ice. Jenkins bookended. the scoring, picking up his 15th and 16th goals of the season to give the Spirit their seventh win in the past eight games. The 18-year-old from Jackson, Mich. found the back of the net in all three of Saginaw’s games this past weekend and in eight of his 10 over the course of the month. Jenkins was a fifth round pick of the Islanders this past summer and has 37 points (16-21–37) over 35 games this season.
• GAME HIGHLIGHTS

3RD STAR: NOEL HOEFENMAYER (OTTAWA 67’s):
Veteran blueliner Noel Hoefenmayer had two goals and an assist to lead the Ottawa 67’s to a 5-2 win in Oshawa. The Arizona Coyotes prospect put the 67’s up 4-0 3:55 into the third period and added an empty netter while also setting up Graeme Clarke for a first period power play goal. The 19-year-old from North York, Ont. has 33 points (9-24–33) over 37 games for the league-leading 67’s. The OHL’s Defenceman of the Month for November, Hoefenmayer is in his fourth season with the 67’s and is currently fifth among OHL defenders with 33 points. He was a fourth round pick of Arizona in 2017.
• GAME HIGHLIGHTS

2019-20 Recaps
Wednesday Highlights: Overtime winners all around
21 mins ago