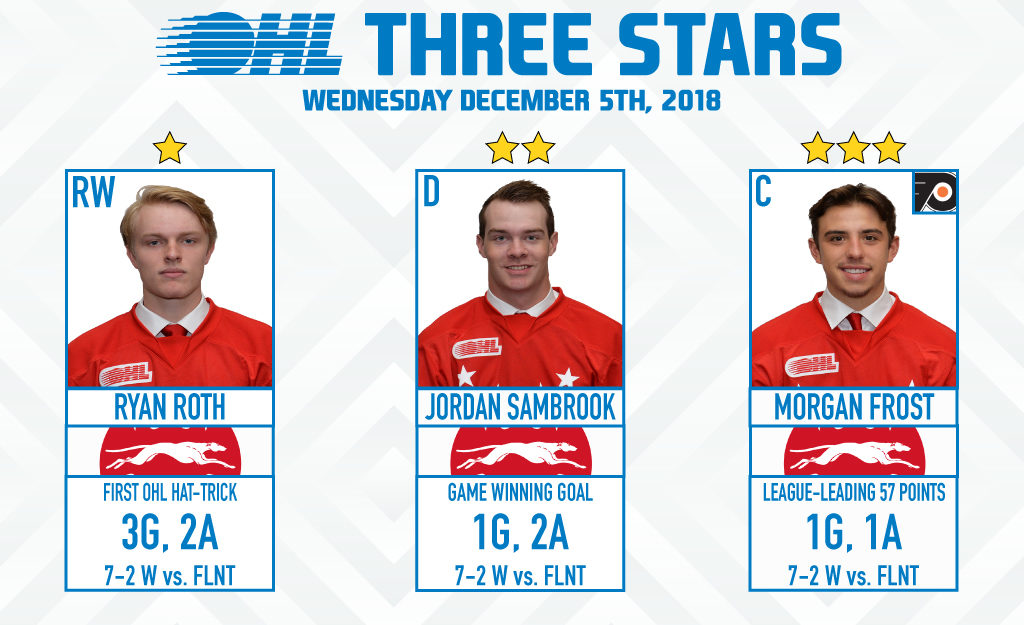 1ST STAR: RYAN ROTH (SAULT STE. MARIE GREYHOUNDS):
Sophomore forward Ryan Roth enjoyed a career night, netting his first OHL hat-trick along with two assists as the Soo Greyhounds defeated visiting Flint 7-2. Roth opened the scoring with 5:09 remaining in the first period before adding a second on the power play 5:07 into the third. He completed the trio by snapping a wrister past Emanuel Vella with 2:12 left in regulation as the Hounds won their third straight contest. The 18-year-old product of Ladue, Mo. brought his season total to 20 points (10-10–20) over 30 games, giving him his second multi-point effort of the season. Roth was signed by the Greyhounds as a free agent in August 2017. He’s a graduate of the Honeybaked U16 program.

2ND STAR: JORDAN SAMBROOK (SAULT STE. MARIE GREYHOUNDS):
Overage defender Jordan Sambrook scored the shorthanded game winner and tacked on two assists as the Soo Greyhounds improved to a West Division-leading 18-7-4-1. Sam-brook’s ninth goal of the season places him tied for second among defencemen in the OHL, one behind teammate Mac Hollowell who also scored on Wednesday. The former Detroit Red Wings draft selection has 23 points (9-14–23) through 29 games this season. Sambrook is in his second tour of duty with the Greyhounds after spending parts of the last three seasons with the Erie Otters. He is a graduate of the South Central Coyotes Minor Midget program and played his Midget AAA hockey with the 2015 Telus Cup champion Toronto Nationals.

3RD STAR: MORGAN FROST (SAULT STE. MARIE GREYHOUNDS):
Philadelphia Flyers prospect Morgan Frost built on his OHL scoring lead, netting his 20th goal of the season while adding an assist as the Soo Greyhounds came out on top 7-2. Frost was also 12-for-23 in the faceoff circle as he brought his season total to a league-leading 57 points (20-37–57) over 30 games. The 19-year-old from Aurora, Ont. has points in eight straight games and is currently on a six-game multi-point run. The Barrie Colts Minor Midget graduate is currently in his fourth season with the Greyhounds. He was recently named to Canada’s National Junior Team Selection Camp.