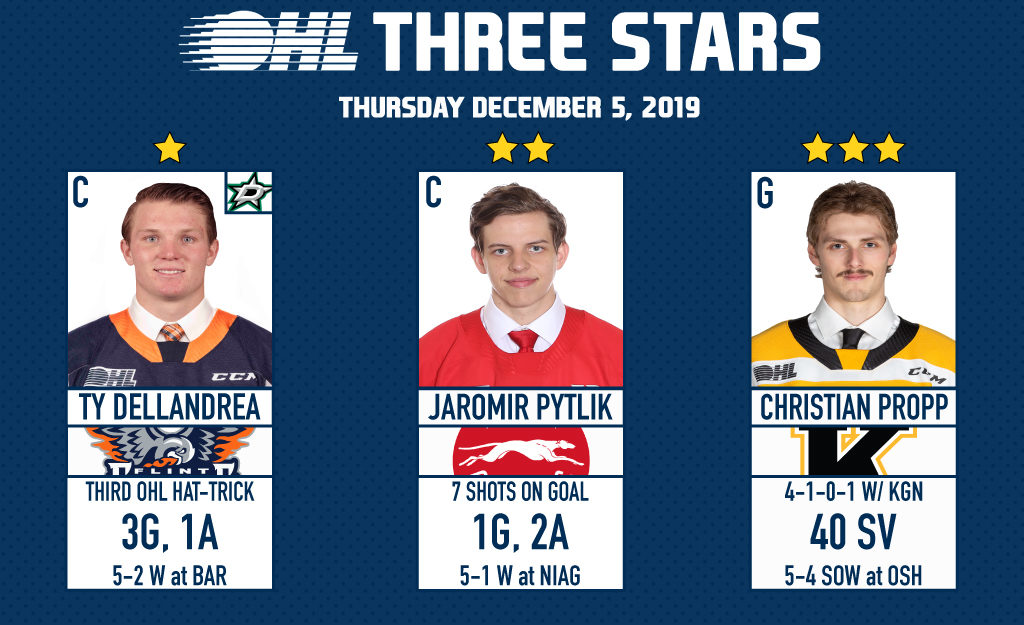 1ST STAR: TY DELLANDREA (FLINT FIREBIRDS) – 3G, 1A
Ty Dellandrea’s four-point night and third career hat-trick guided the Firebirds to a dominant 5-2 performance in Barrie. Dellandrea, who was drafted by the Dallas Stars 13th overall in the 2018 NHL Entry Draft, scored twice in the first period to lift his team to a 3-0 lead. The 6-foot-1 centreman completed the hat-trick with just a minute and a half to go in the game, scoring the Firebirds’ fifth goal on the night. In his fourth year with the Firebirds, Dellandrea currently sits second in team scoring with 30 points (14-16-30) so far on the year. He’ll be attending Hockey Canada’s National Junior Team Selection Camp next week.
• HIGHLIGHTS

2ND STAR: JAROMIR PYTLIK (SOO GREYHOUNDS) – 1G, 2A
Leading Greyhounds scorer Jaromir Pytlik registered a goal and two assists in his team’s 5-1 win in Niagara on Thursday. The second-year Greyhound and 2020 NHL Draft hopeful scored at the 3:45 marker of the second period, and picked up assists on goals from teammates Robert Calisti and Ryan O’Rourke. The Dacice, Czech Rep. native, taken in the second round of the 2018 CHL Import Draft by the Soo, has amassed 30 points (12-18-30) through 28 games.
• HIGHLIGHTS

2ND STAR: CHRISTIAN PROPP (KINGSTON FRONTENACS) – 40 SVS
Kingston netminder Christian Propp put on a 40-save performance in a 5-4 shootout win against the Oshawa Generals. The fourth-year veteran provided numerous big saves including a game-saver late in overtime to send the game to a shootout where he stopped both Oshawa shooters he faced. Since being acquired from the Soo Greyhounds last month, the overager has suited up for six games with the Fronts and has an .898 save percentage with a 4-1-0-1 record since putting on the yellow jersey. This is Propp’s second 40-save game this season and first as a member of the Fronts.
• HIGHLIGHTS