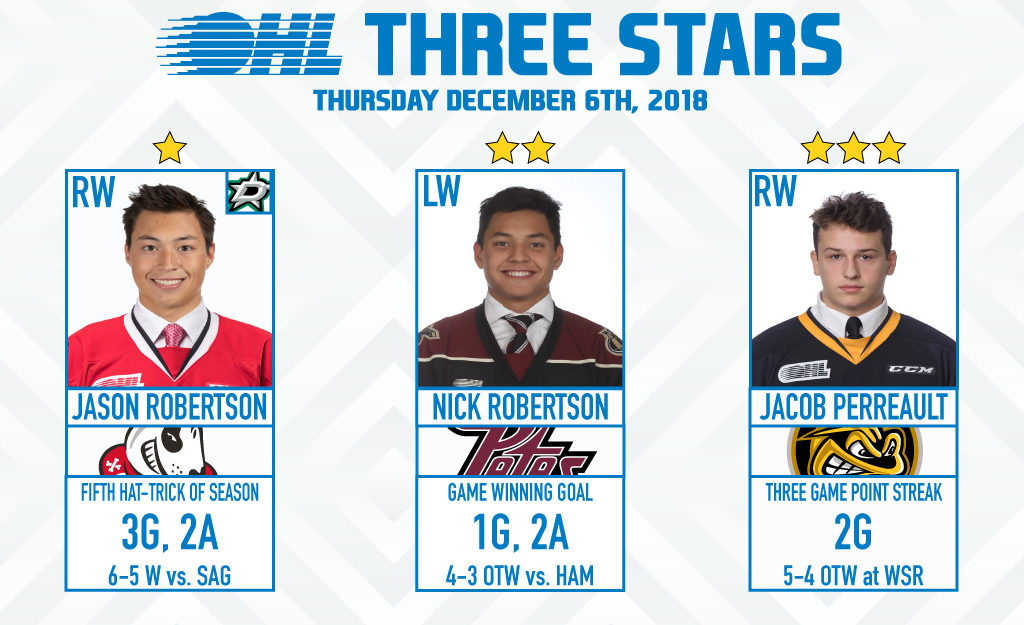 1ST STAR: JASON ROBERTSON (NIAGARA ICEDOGS):
Dallas Stars prospect Jason Robertson keeps piling up the points. The newly acquired Niagara IceDogs forward picked up his fifth hat-trick of the season as part of a five-point performance on Thursday, giving his club its fourth straight win in a 6-5 triumph over the visiting Saginaw Spirit. Robertson climbed into the OHL goal-scoring lead, becoming the first player to light the lamp 30 times this season. He also sits tied for the OHL lead in points with 57, extending his current point streak to 14 games. The 19-year-old product of Northville, Mich. now has 19 points (7-12–19) in six games with Niagara. The hat-trick is the ninth of Robertson’s OHL career.
• GAME HIGHLIGHTS

2ND STAR: NICK ROBERTSON (PETERBOROUGH PETES):
While older brother Jason took first star honours, NHL Draft prospect Nick Robertson did some fine work of his own on Thursday, scoring the overtime winner in a three-point showing against the Hamilton Bulldogs. The Peterborough Petes took a 4-3 win on Robertson’s overtime breakaway backhand deke, giving him a goal and two assists on the evening. He started things off by setting up Adam Timleck for the Petes’ Teddy Bear Toss goal 12:17 into the first period. The 17-year-old from Northville, Mich. has 16 points (9-7–16) in as many games this season, recording at least a point in five of his last six outings. He was Peterborough’s first round (16th overall) pick from the Toronto Red Wings Minor Midgets in 2017.
• GAME HIGHLIGHTS

3RD STAR: JACOB PERREAULT (SARNIA STING):
Rookie forward Jacob Perreault scored his 11th and 12th goals of the season as the Sarnia Sting defeated the Windsor Spitfires 5-4 in overtime. The road victory saw Perreault open the scoring 1:22 into the first period before adding a second on the power play with 5:54 left in the third period. The 16-year-old from Hinsdale, Ill. has 21 points (12-9–21) over 25 games this season and points in three straight contests. He currently sits tied for second in OHL rookie scoring. The son of former NHL forward Yanic Perreault, he was Sarnia’s first round (19th overall) pick in 2018.
• GAME HIGHLIGHTS