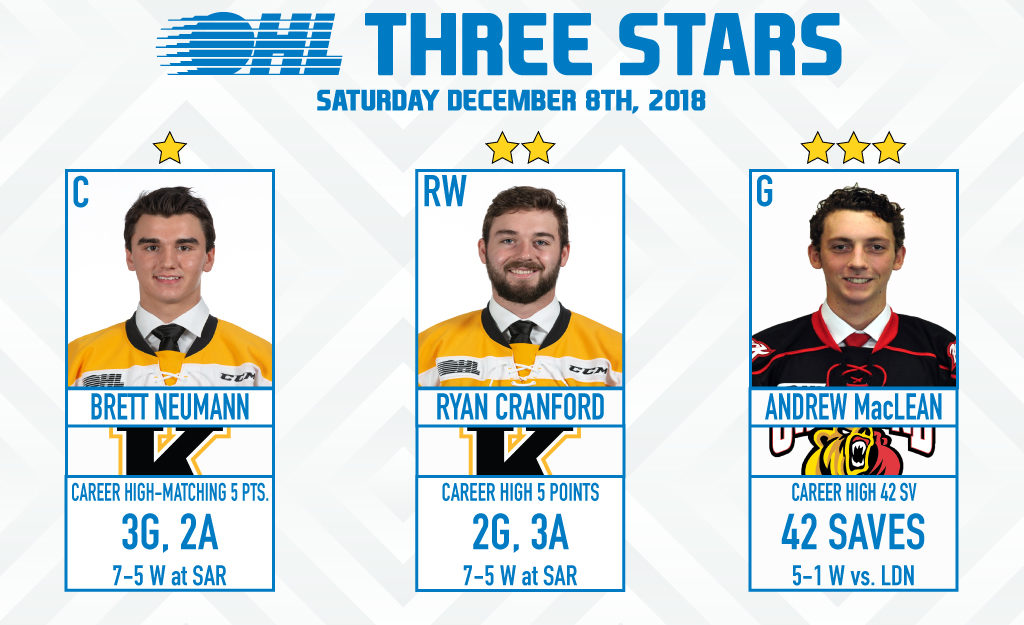 1ST STAR: BRETT NEUMANN (KINGSTON FRONTENACS):
Brett Neumann recorded his second five-point game of the season, recording a hat-trick and two assists as the Kingston Frontenacs took a thrilling 7-5 win in Sarnia. Kingston snapped a five-game road skid as Neumann scored in the first, second and third periods, completing his hat-trick with 2:42 remaining in regulation to put the Fronts up by two. Neumann was also 15-for-25 in the faceoff circle as the Frontenacs bounced back from an 8-1 loss in London on Friday. The 19-year-old fourth-year veteran has 41 points (21-20–41) in 31 games this season. He was Erie’s third round pick in 2015 from the Don Mills Flyers Minor Midgets.
• GAME HIGHLIGHTS

2ND STAR: RYAN CRANFORD (KINGSTON FRONTENACS):
Overage captain Ryan Cranford scored the game winning goal 9:07 into the third period, putting the Kingston Frontenacs up for good in a 7-5 road win over the Sarnia Sting. Cranford’s career day included two goals, three assists and five points as he worked alongside linemate Brett Neumann who also churned out five points in the winning cause. Ten of Cranford’s 17 points this season have come in the span of the past six games. The 20-year-old from Embrun, Ont. is in his fourth year with the Fronts after being a 10th round pick back in 2014 from the Eastern Ontario Wild Minor Midgets.
• GAME HIGHLIGHTS

3RD STAR: ANDREW MacLEAN (OWEN SOUND ATTACK):
Rookie goaltender Andrew MacLean turned aside a career-high 42 shots, helping the Owen Sound Attack bring the London Knights’ 15-game winning streak to an end with a 5-1 victory on home ice. The 17-year-old MacLean was good from start to finish, helping the Attack win despite being outshot 43-28 by the fourth-ranked team in the CHL this week. London’s Adam Boqvist scored midway through the second period, but that’s the only goal the Knights could muster against the young native of Port Huron, Mich. MacLean improves to 6-3-0-1 through his first 12 OHL contests. He’s a graduate of the Lambton Jr. Sting Minor Midget program and spent last season with the Detroit Honeybaked U16 team.
• GAME HIGHLIGHTS