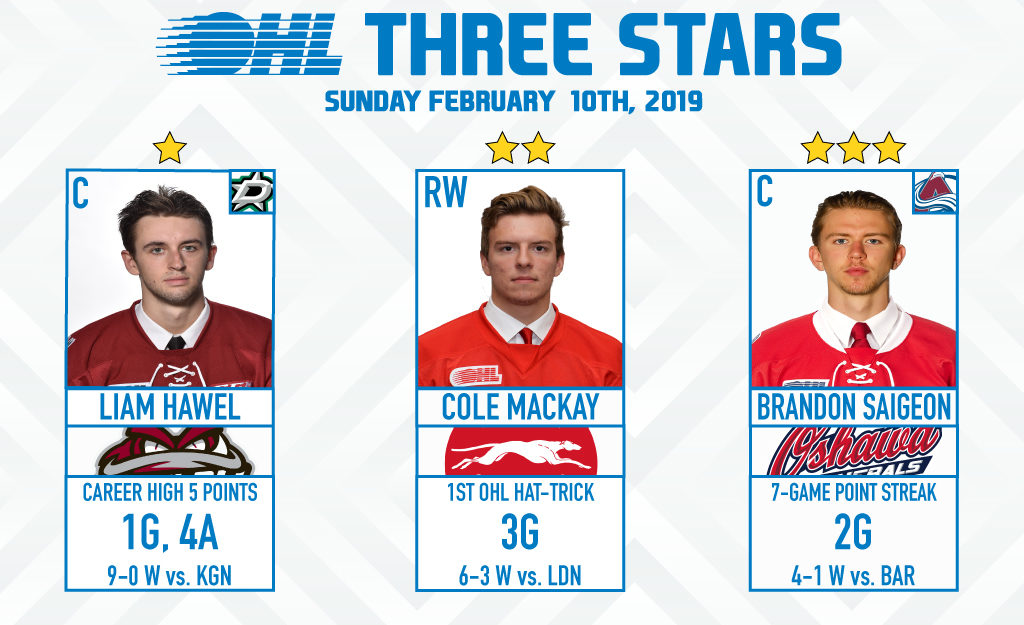 1ST STAR: LIAM HAWEL (GUELPH STORM):
Dallas Stars prospect Liam Hawel recorded a career high five points, powering the Guelph Storm past the Kingston Frontenacs 9-0. The 6-foot-5, 182Ib centre continued a six game point streak with a goal and four assists as the Storm climbed to within four points of third place in the Western Conference. Hawel has points in 13 of his last 14 games and a total of 64 (31-33–64) over 51 games. The 19-year-old from Arnprior, Ont. was Dallas’ fourth round pick in the 2017 NHL Draft.
• GAME HIGHLIGHTS

2ND STAR: COLE MACKAY (SAULT STE. MARIE GREYHOUNDS):
Cole MacKay‘s first OHL hat-trick helped the Soo Greyhounds clinch a playoff spot on Sunday, defeating the visiting London Knights 6-3. The sophomore winger scored all three of his goals in the second period, doing so in a span of 8:32 as the Hounds pulled to within four points of the Knights atop the Western Conference. MacKay has 49 points (22-27–49) over 50 games this season and put together back-to-back three point contests over the weekend. The Sault Ste. Marie, Ont. product was a fifth round pick in 2017 from the Kitchener Jr. Rangers Minor Midgets. MacKay is eligible for the 2019 NHL Draft.
• GAME HIGHLIGHTS

3RD STAR: BRANDON SAIGEON (OSHAWA GENERALS):
Colorado Avalanche prospect Brandon Saigeon scored his 34th and 35th goals of the season to lead the Oshawa Generals past visiting Barrie 4-1. The overage centreman was also 11-for-17 in the faceoff circle and logged seven shots on goal as the Generals won for the fifth time in the past six games. Saigeon is in the midst of a seven game point streak and has accumulated 82 points (35-47–82) over 54 games between Oshawa and Hamilton this season. The 6-foot-2, 193Ib pivot from Grimsby, Ont. is in his fifth OHL season and is approaching the 300-game milestone. He was Colorado’s fifth round pick in 2018 after winning an OHL title with Hamilton last spring.
• GAME HIGHLIGHTS