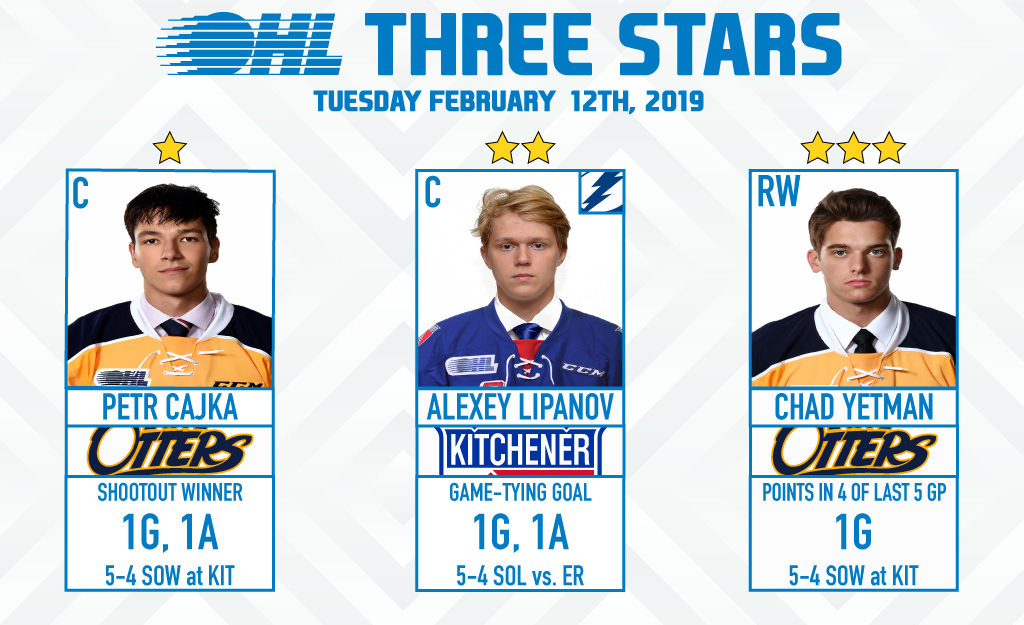 1ST STAR: PETR CAJKA (ERIE OTTERS):
Czech forward Petr Cajka had a goal and an assist before scoring the shootout winner in Tuesday’s 5-4 Erie Otters road win over the Kitchener Rangers. Cajka, how has scored in three of the past four games, increased his production to 31 points (19-12–31) over 48 games this season. The draft eligible 18-year-old from Kadan, Czech Rep. was the 12th overall pick of the 2018 CHL Import Draft.

2ND STAR: ALEXEY LIPANOV (KITCHENER RANGERS):
Tampa Bay Lightning prospect Alexey Lipanov scored the game-tying goal with 2:49 left in regulation to help the Kitchener Rangers reach overtime and gain a valuable point in the Western Conference standings. The Rangers would fall to the Erie Otters 5-4 in a shootout, but Lipanov finished with a goal and an assist, was plus-2 and went 9-for-14 in the faceoff circle. The 19-year-old from Moscow, Russia has 25 points (9-16–25) over 47 games this season. Tampa Bay’s third round pick in 2017, Lipanov split last season between Barrie and Sudbury. He was the 44th overall pick of the 2016 CHL Import Draft.

3RD STAR: CHAD YETMAN (ERIE OTTERS):
Chad Yetman had a goal and played big minutes in Kitchener on Tuesday as his Erie Otters prevailed 5-4 in a shootout. The 18-year-old sophomore from Whitby, Ont. increased his production to 43 points (16-27–43) over 53 games this season. Yetman has points in four of his last five games. He finished Tuesday’s contest with a plus-2 rating and four shots on goal. Yetman was Erie’s 10th round pick in 2016 from the Whitby Wildcats Minor Midgets.