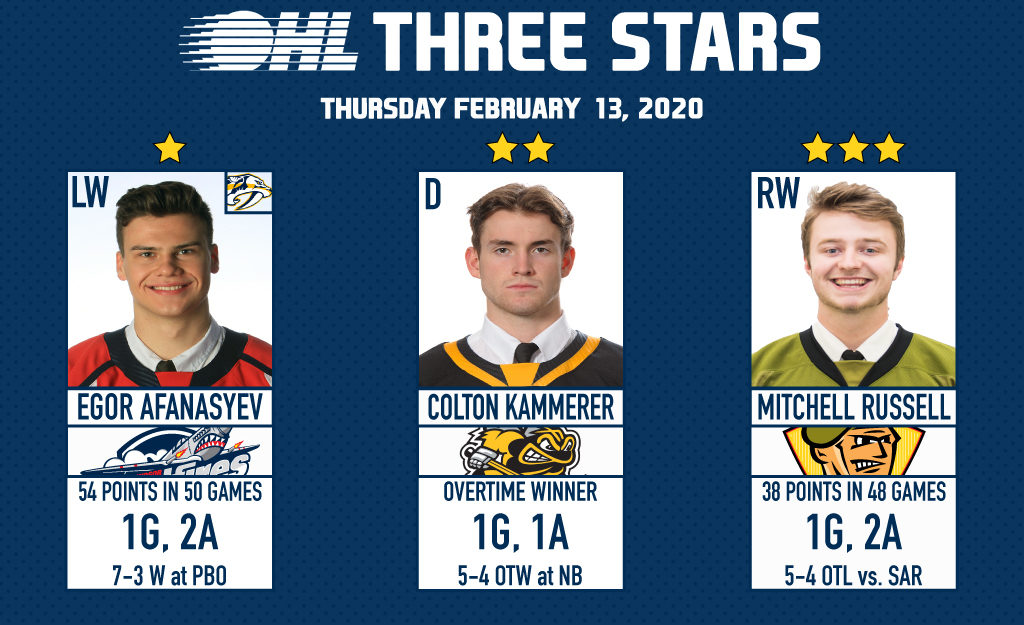 1ST STAR: EGOR AFANASYEV (WINDSOR SPITFIRES) – 1G, 2A
Egor Afanasyev put up a goal and two assists in Windsor’s big 7-3 blowout of the host Peterborough Petes. He netted his 23rd goal of the assist at the 7:37 marker of the second period, capping off a 6-0 lead his team would carry into the final frame. The Moscow, Russia native added help on Vegas Golden Knight prospect Connor Corcoran’s second period goal to make it 5-0 and later fed Dallas Stars pick Curtis Douglas for a final goal on the empty net. The 19-year-old winger boasts 54 points (23-31—54) through 50 games with the Spits this season. Drafted by the Ottawa 67’s in 2017, Afanasyev committed to the Spitfires this past offseason. He was drafted by the Nashville Predators in the second round of the 2019 NHL Draft.
• HIGHLIGHTS

2ND STAR: COLTON KAMMERER (SARNIA STING) – 1G, 1A
Colton Kammerer connected with Jamieson Rees for his Sarnia Sting’s 5-4 overtime winner in North Bay Thursday night. The 18-year-old native of Brooklin, Ont. found the back of the net 2:13 into the extra frame and, earlier, registered an assist on a goal from Joseph Mack in the second period for a 2-1 lead. Kammerer holds four goal and 10 assists for 14 points through 41 games in his third stint with Sarnia, on pace to surpass his sophomore total of 15 points (5-10—15) through 60 games last season. He was selected by the Sting in the third round of the 2017 OHL Priority Selection.
• HIGHLIGHTS

3RD STAR: MITCHELL RUSSELL (NORTH BAY BATTALION) – 1G, 2A
Mitchell Russell’s three-point performance included a goal and two assists as the North Bay Battalion fell to the Sarnia Sting 5-4 in overtime. The 18-year-old winger scored at the 5:55 mark of the second period to open the Battalion scoring and tie things up 1-1, before registering helpers on back-to-back goals from Luke Moncada and Paul Christopoulos just over a minute apart. The third year OHLer has amassed 19 goals and 19 assists for 38 points in 48 games. A first round pick of the Owen Sound Attack in the 2017 OHL Priority Selection, Russell was traded to the Troops midway through the 2018-19 season.
• HIGHLIGHTS

2019-20 Recaps
Saturday Highlights: Ingham the answer against Firebirds
17 hours ago