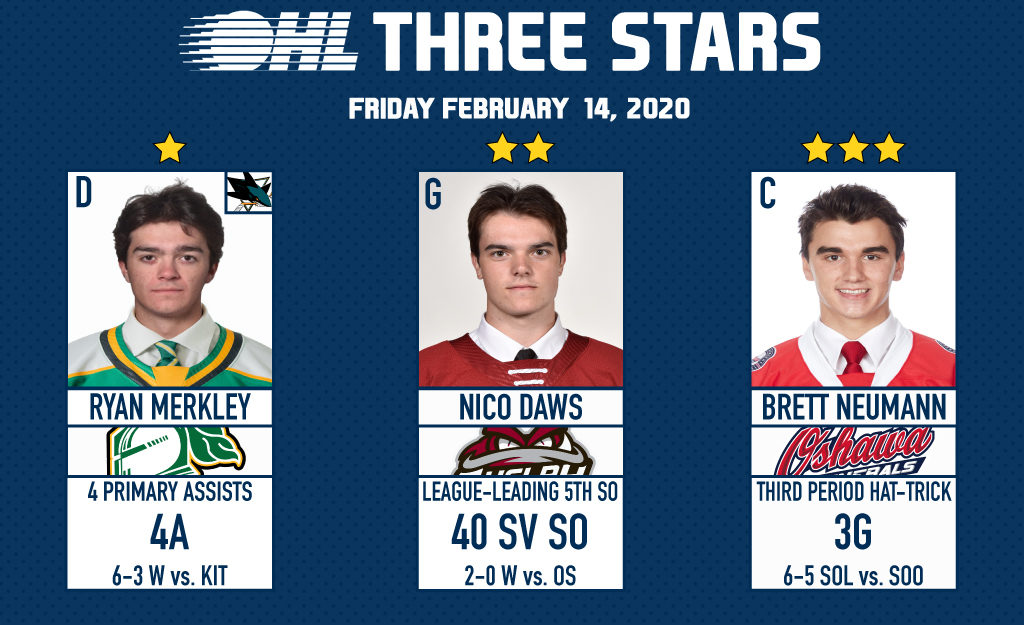 1ST STAR: RYAN MERKLEY (LONDON KNIGHTS) – 4A
San Jose Sharks prospect Ryan Merkley strung together four different primary assists as the London Knights defeated Midwest Division rival Kitchener 6-3 on home ice. Merkley increased his output to 67 points (13-54–67) over 49 games this season, good for the second most by an OHL defenceman. The 19-year-old pulled into a tie for eight on the OHL’s all-time list of points by a defenceman, bringing his total to 260 (52-208–260) over 237 games. The Mississauga, Ont. native is now in his fourth OHL season. He was San Jose’s first round (21st overall) pick in the 2018 NHL Draft.
• HIGHLIGHTS

2ND STAR: NICO DAWS (GUELPH STORM) – 40 SV SO
Guelph Storm netminder Nico Daws stopped all 40 shots he faced, backstopping his squad to victory despite their being outshot 40-14. Goals from Cam Hillis and Pavel Gogolev were enough to lift the Storm to a 2-0 victory, pushing them ahead of Owen Sound by two points and into third in the Midwest Division. Daws’ league-leading fifth shutout of the season sees him improve to 18-6-2-3 with a 2.28 goals-against average and .930 save percentage through 30 contests. The Canadian National Junior Team gold medalist is the top-ranked North American goaltender ahead of the 2020 NHL Draft according to NHL Central Scouting’s Midterm Rankings.
• HIGHLIGHTS

3RD STAR: BRETT NEUMANN (OSHAWA GENERALS) – 3G
Overage forward Brett Neumann scored a third period hat-trick to help his Oshawa Generals earn a point in a 6-5 shootout loss to visiting Sault Ste. Marie. Neumann extended his goal-scoring streak to four games, bringing him to 40 on the campaign along with a total of 75 points (40-35–75) through 52 games. The fifth-year veteran turns 21 on Saturday and has now recorded two hat-tricks on the season. Neumann was originally a third round pick of the Erie Otters back in 2015.
• HIGHLIGHTS

2019-20 Recaps
Saturday Highlights: Ingham the answer against Firebirds
16 hours ago