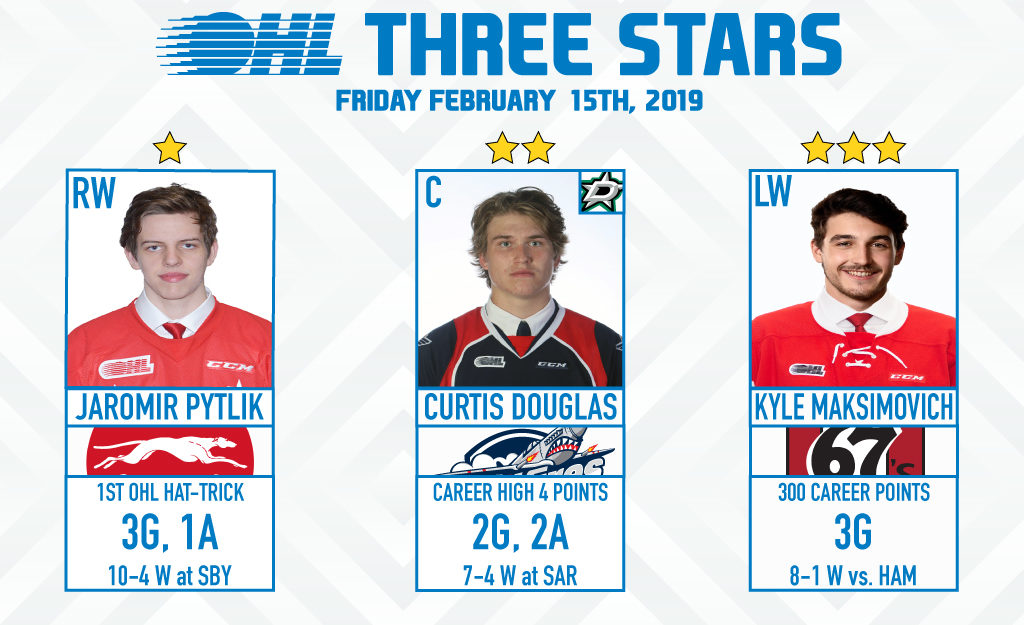 1ST STAR: JAROMIR PYTLIK (SAULT STE. MARIE GREYHOUNDS):
Jaromir Pytlik stole the show with his first OHL hat-trick, recording three goals and an assist as the Soo Greyhounds defeated the northern rival Sudbury Wolves 10-4 on the road. Pytlik’s big night came in his 13th game of the season as the 17-year-old from Dacice, Czech Republic boosted his output to 10 points (6-4–10) on the campaign. Pytlik played on a line alongside veterans Morgan Frost and Keeghan Howdeshell, helping the Hounds stop Sudbury’s winning streak at nine games to continue to hold down first place in the West Division. Sault Ste. Marie’s second round pick in the 2018 CHL Import Draft, Pytlik will be eligible for the 2020 NHL Draft.
• GAME HIGHLIGHTS

2ND STAR: CURTIS DOUGLAS (WINDSOR SPITFIRES):
Big 6-foot-9, 250Ib Windsor Spitfires forward Curtis Douglas had a whopper of a night on Friday, recording two goals and two assists for a career high four points as the Windsor Spitfires defeated Sarnia 7-4 on the road. Douglas scored his 21st and 22nd goals of the season, helping the Spits defeat the rival Sting on a second straight night as they maintained their three-point cushion on the eighth and final playoff spot in the Western Conference while pulling to within one point of the seventh place Sting. Douglas has 43 points (22-21–43) over 56 games this season after being Dallas’ fourth round pick last summer. The Oakville, Ont. native is a graduate of the Mississauga Senators Minor Midget program.
• GAME HIGHLIGHTS

3RD STAR: KYLE MAKSIMOVICH (OTTAWA 67’s):
Overage winger Kyle Maksimovich potted his fourth hat-trick of the season and surpassed the 300 career point mark in the process as the Ottawa 67’s took care of the visiting Hamilton Bulldogs by a score of 8-1. Maksimovich scored in the first, second and third periods to give him 34 goals and 77 points on the campaign including 21 of those points over a 16-game span in Ottawa. The 20-year-old native of Hamilton, Ont. has a total of 302 points (114-188–302) over 308 career regular season games. Maksimovich, who won an OHL Championship with the Erie Otters in 2017, is a graduate of the Toronto Marlboros Minor Midget program.
• GAME HIGHLIGHTS 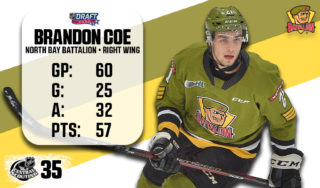 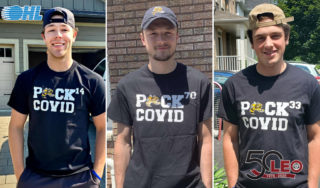