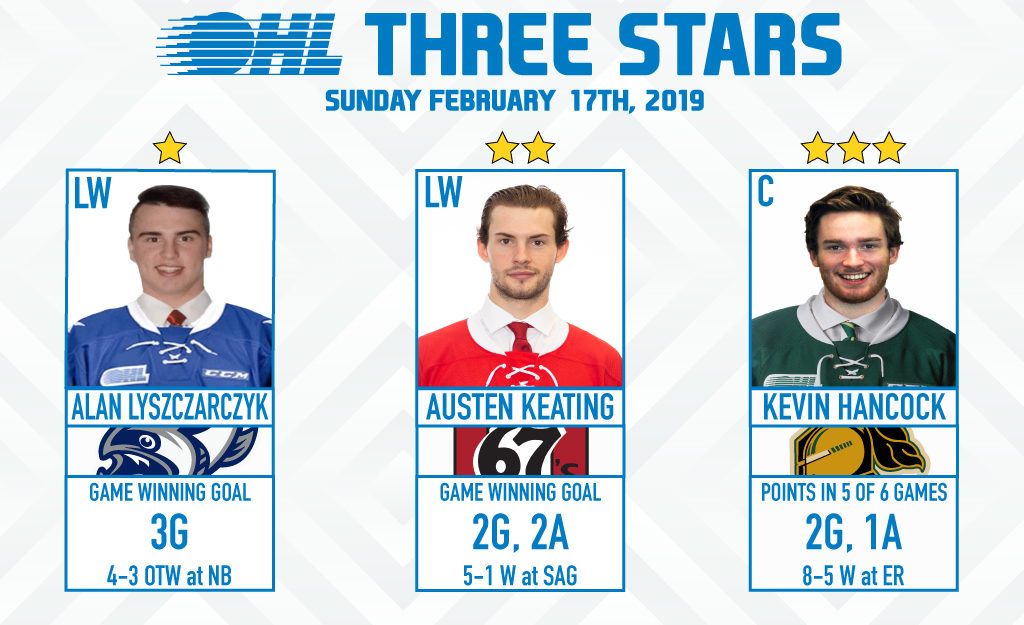 1ST STAR: ALAN LYSZCZARCZYK (MISSISSAUGA STEELHEADS):
Alan Lyszczarczyk had a 21st birthday to remember on Sunday, ripping home a hat-trick that included an overtime winner as the Mississauga Steelheads took a 4-3 decision in North Bay. Lyszczarczyk scored in the first and second before helping the Steelheads recover from a 3-2 deficit when he put home the overtime winner on a rush up the ice. Lyszczarczyk’s second hat-trick of the season came on seven shots on goal as he increased his production total to 68 points (32-36–68) over 52 games between Mississauga and Owen Sound. The Wallington, NJ native is approaching the 200-point milestone on his OHL career that also included a two year tenure in Sudbury.
• GAME HIGHLIGHTS

3RD STAR: KEVIN HANCOCK (LONDON KNIGHTS):
Veteran centreman Kevin Hancock scored twice and added an assist as the London Knights defeated the Erie Otters 8-5 on the road. Hancock opened the scoring on a penalty shot 2:10 into the first period before later connecting with Evan Bouchard and Alex Formenton for his 43rd goal of the season. The overage pivot was effective in the faceoff circle as is his custom, going 14-for-25 as the Knights maintained their lead atop the Western Conference. The 20-year-old Mississauga, Ont. native has points in five of his last six games and a total of 89 points (43-46–89) over 57 contests between London and Owen Sound. Hancock attended rookie camp with the Buffalo Sabres in September.
• GAME HIGHLIGHTS