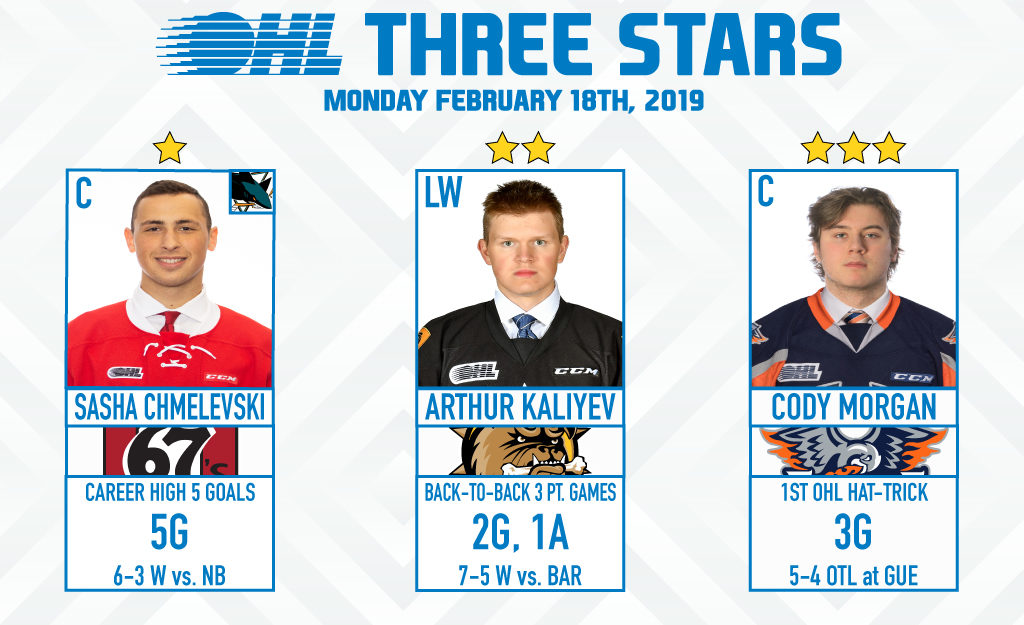 1ST STAR: SASHA CHMELEVSKI (OTTAWA 67’s):
San Jose Sharks prospect Sasha Chmelevski had an afternoon to remember, scoring a career high five goals as the Ottawa 67’s doubled-up visiting North Bay 6-3. Chmelevski increased his season total to 29 goals, registering nine shots on goal while going 12-for-17 in the faceoff circle. The 19-year-old from Northville, Mich. has 11 goals in the month of February and a total of 65 points (29-36–65) over 46 games this season. The five-goal effort is one shy of a 67’s franchise record and the first since Tyler Toffoli last accomplished the feat in December 2010. Chmelevski was San Jose’s sixth round pick in 2017.
• GAME HIGHLIGHTS

3RD STAR: CODY MORGAN (FLINT FIREBIRDS):
Sophomore forward Cody Morgan netted his first career OHL hat-trick in a losing cause as the Flint Firebirds fell 5-4 in overtime to the host Guelph Storm. Morgan scored in the first, second and third periods, tying the score at four 8:55 into the third frame. The 18-year-old Richmond Hill, Ont. product has 30 points (9-21–30) over 54 games between Flint and Windsor this season including 21 points (7-14–21) in as many contests since joining the Firebirds. Originally Kingston’s first round pick in the 2017 OHL Priority Selection, the Toronto Jr. Canadiens Minor Midget grad is eligible for the 2019 NHL Draft.
• GAME HIGHLIGHTS