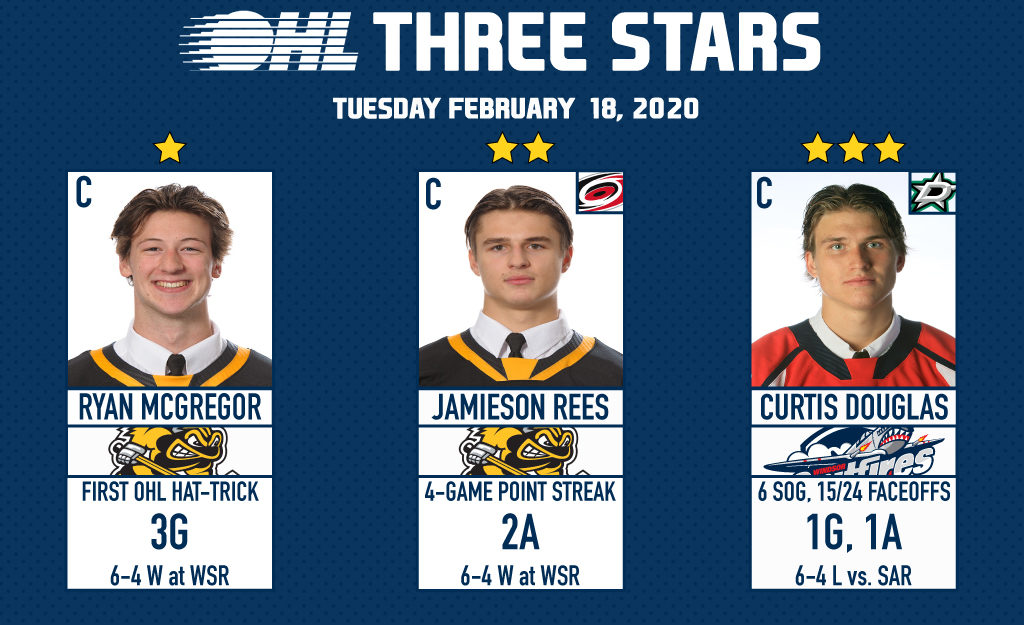 1ST STAR: RYAN MCGREGOR (SARNIA STING) – 3G
Overage captain Ryan McGregor recorded his first career OHL hat-trick in his 280th career contest, leading his club past the Windsor Spitfires 6-4. The Sting’s all-time games played leader, McGregor brought his offensive production to 59 points (23-36–59) through 46 games this season, good for 219 (86-133–219) career regular season points. The Burlington, Ont. native is a former second round pick of the Sting back in the 2015 OHL Priority Selection. He was selected by the Toronto Maple Leafs in the sixth round of the 2017 NHL Draft but went unsigned. McGregor was invited to rookie camp with the Columbus Blue Jackets back in September.

2ND STAR: JAMIESON REES (SARNIA STING) – 2A
Carolina Hurricanes prospect Jamieson Rees recorded a pair of assists in Tuesday’s 6-4 road win over Windsor. The soon-to-be 19-year-old is on a four-game point streak, compiling 56 points (18-38–56) over 33 games this season. A former ninth overall pick by the Sting in the 2017 OHL Priority Selection, Rees was chosen in the second round (44th overall) by the Hurricanes last summer. The Hamilton, Ont. native has represented Canada international at the World Under-17 Hockey Challenge, the World Under-18 Hockey Championship and the Hlinka Gretzky Cup where he won gold in 2018.

3RD STAR: CURTIS DOUGLAS (WINDSOR SPITFIRES) – 1G, 1A
Dallas Stars prospect Curtis Douglas had a goal and an assist as the Windsor Spitfires fell 6-4 to the visiting Sarnia Sting on Tuesday. The 6-foot-9, 236Ib. centre has 51 points (24-27–51) through 53 games this season. Douglas was selected by Dallas in the fourth round of the 2018 NHL Draft. He’s now in his fourth OHL season, having also spent time with the Barrie Colts.