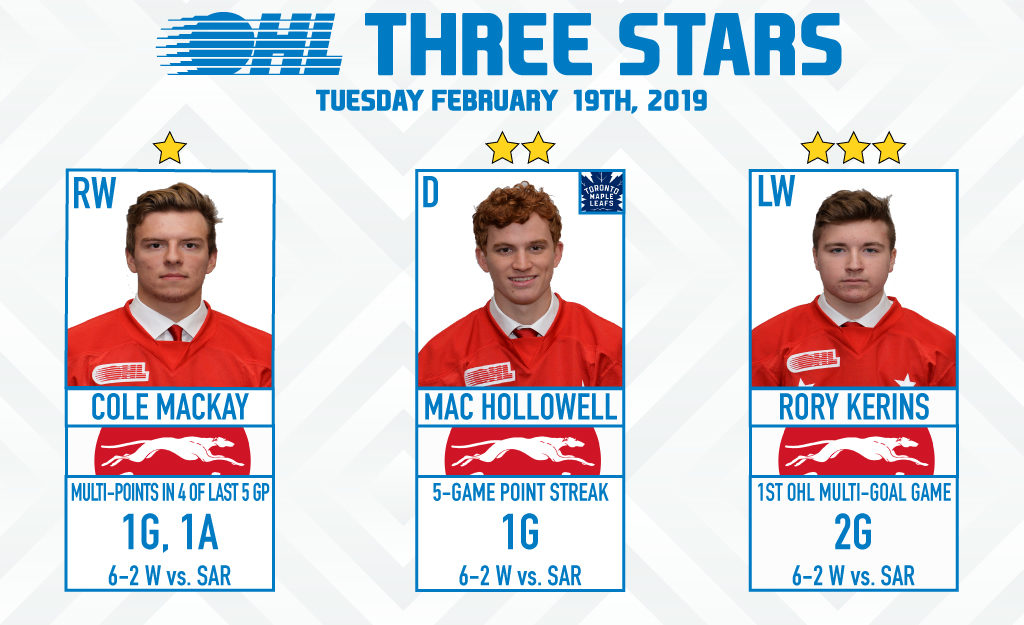 1ST STAR: COLE MACKAY (SAULT STE. MARIE GREYHOUNDS):
Cole MacKay‘s sophomore surge continued on Tuesday as the 17-year-old hometown product scored and added an assist in a 6-2 Soo Greyhounds win over visiting Sarnia. MacKay has multi-point outputs in four of his last five games, helping the West Division leading Greyhounds with an overall total of 54 points (24-30–54) over 53 games this season. A graduate of the Kitchener Jr. Rangers Minor Midget program, MacKay was Sault Ste. Marie’s fifth round pick in the 2017 OHL Priority Selection.

2ND STAR: MAC HOLLOWELL (SAULT STE. MARIE GREYHOUNDS):
The OHL’s top-scoring defenceman, Mac Hollowell struck again on Tuesday with his 22nd goal of the season as the Soo Greyhounds got the better of the Sarnia Sting. Hollowell’s 22 goals are the most by a Hounds defenceman in a full season with the club since CHL Defenceman of the Year Ryan Sproul scored 23 during the 2011-12 season. A fourth round pick of the Toronto Maple Leafs last summer, Hollowell has 66 points (22-44–66) over 52 games and is riding a current five game point streak. The 20-year-old from Niagara Falls, Ont. is in his fourth full season with the Hounds, having played 247 career regular season games with the franchise.

3RD STAR: RORY KERINS (SAULT STE. MARIE GREYHOUNDS):
Rookie winger Rory Kerins scored twice, putting up the first multi-goal performance of his OHL career as the Soo Greyhounds defeated visiting Sarnia 6-2. Kerins opened and closed the scoring with his 7th and 8th goals of the season. The 16-year-old from Caledon, Ont. has 19 points (8-11–19) over 45 games after being a fourth round pick from the Mississauga Rebels Minor Midgets last spring.