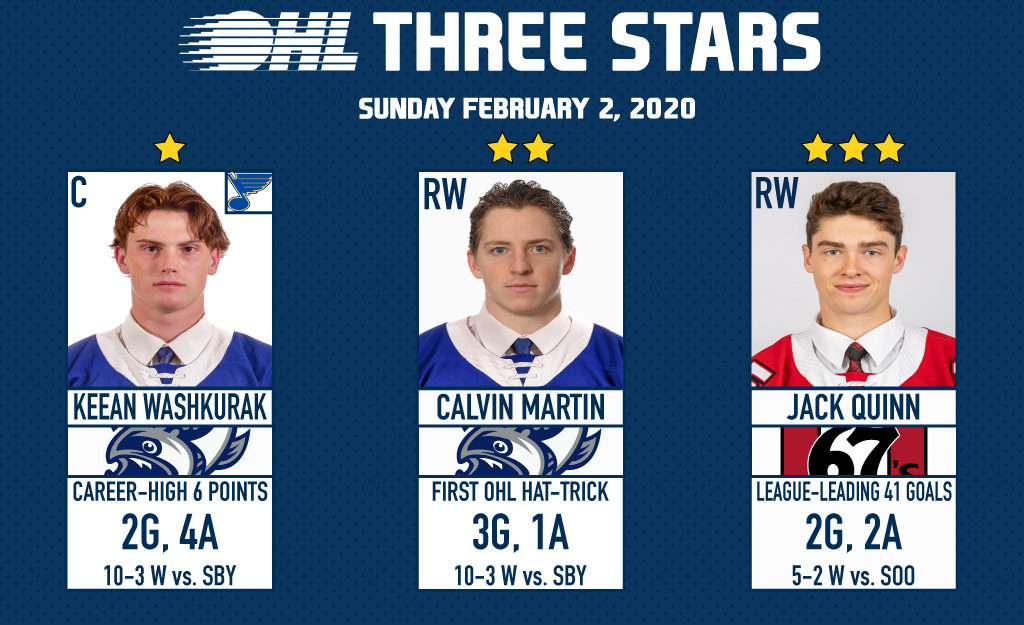 KEEAN WASHKURAK (MISSISSAUGA STEELHEADS) – 2G, 4A
Keean Washkurak put up a career-high six points in his Mississauga Steelheads’ 10-3 blowout of the Central Division leading Sudbury Wolves. He scored at the 14:47 marker of the second period to lift the Trout up 4-1 and again in the opening minutes of the final frame to cap off his team’s seven-goal barrage. The Waterloo, Ont. native also registered four assists throughout the afternoon. The 18-year-old centreman now holds 15 goals and 38 points through the first 37 games of his third season with the Trout. He was picked up 30th overall at the 2017 OHL Priority Selection and was drafted by the St. Louis Blues in the fifth round of the NHL Draft last summer.
• HIGHLIGHTS

CALVIN MARTIN (MISSISSAUGA STEELHEADS) – 3G, 1A
OHL veteran Calvin Martin recorded his first ever OHL hat-trick and also picked up an assist for a career-high four-point performance, helping the Steelheads to their 10-3 toppling of the Sudbury Wolves. Martin opened the scoring 7:19 into the first period, then scored three minutes into the middle frame for a 5-1 win. He completed the trio midway through the third shorthanded to lift his team up 9-2. Martin, a native of Peterborough, has 34 points (16-18—34) to his name in 44 games played this season. The overaged centreman was dealt to the Steelheads from the Sarnia Sting in October, and spent time with the Sault Ste. Marie Greyhounds prior to his stint with the Sting. Martin was a sixth round pick of the Greyhounds at the 2015 OHL Priority Selection.
• HIGHLIGHTS

JACK QUINN (OTTAWA 67’S) – 2G, 2A
Top NHL Draft prospect Jack Quinn’s league-leading goal total hit 40 and 41 in Ottawa’s victorious 5-2 tilt with the Soo Greyhounds on Sunday afternoon. The native of Cobden, Ont. helped his team to a 2-1 lead midway through the second period and later found the empty net to lift them up 5-1. Quinn now holds 41 goals and 67 points through 46 games in the Barber Pole sweater this season. The 18-year-old winger was drafted in the second round of the 2017 OHL Priority Selection. NHL Central Scouting has Quinn ranked ninth among North American Skaters in their recent Midterm Draft Rankings list.
• HIGHLIGHTS

flint firebirds player of the week
OHL 'On the Run' Player of the Week: Tyler Tucker
7 hours ago