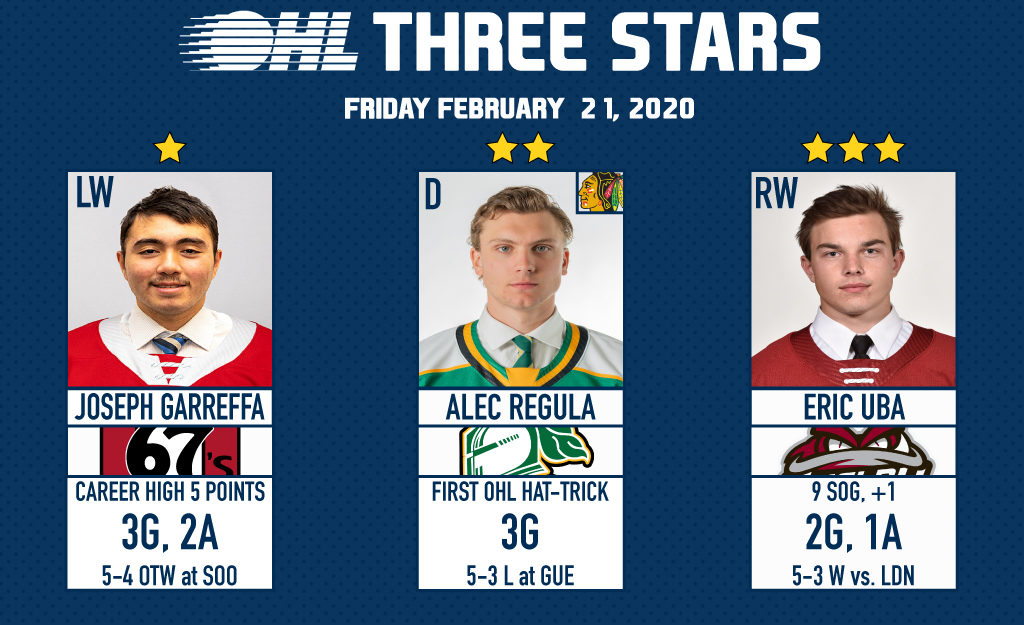 1ST STAR: JOSEPH GARREFFA (OTTAWA 67’S) – 3G, 2A
Ottawa overager Joseph Garreffa scored 1:30 into overtime to complete his second hat-trick of the season and cap off a five-point performance that propelled his 67’s to a 5-4 OT win over the Soo Greyhounds. He scored just 1:06 into the game to give Ottawa an early 1-0 advantage, and again in the middle frame’s final two minutes to give his team a brief 3-2 lead. He’d complete the triple-goal showing in extra time to effectively snap Ottawa’s three game losing skid. The OHL veteran boasts 78 points (31-47—78) in 44 games, placing him third in scoring among his teammates. Garreffa also managed to surpass the 300 career point plateau on Friday. A native of Toronto, Garreffa was drafted in the third round of the 2015 OHL Priority Selection by the Kitchener Rangers, and spent four seasons sporting the Blueshirt before being traded to the Barber Poles squad this past offseason.
• HIGHLIGHTS

2ND STAR: ALEC REGULA (LONDON KNIGHTS) – 3G
Chicago Blackhawks prospect Alec Regula earned all three goals for his first OHL hat-trick in his London Knights’ 5-3 loss at the hands of the Guelph Storm. The 19-year-old defender struck twice in the second period, putting the Knights in the lead both times, before completing the trio with a tying goal to make it 3-3 midway through the third period. Regula’s hat-trick is the first by a Knights defenceman since Matt Clarke on March 13, 2009. The native of West Bloomfield, Mich. boasts 52 points over 50 games in his third OHL season. Regula was a fourth round selection of the Knights at the 2016 OHL Priority Selection and played a season with the USHL’s Chicago Steel before heading to London. He was drafted by the Detroit Red Wings at the 2018 NHL Draft before his rights were traded to the Chicago Blackhawks in October of 2019.
• HIGHLIGHTS

3RD STAR: ERIC UBA (GUELPH STORM) – 2G, 1A
Guelph Storm winger Eric Uba found the back of the net twice and registered an assist in his team’s tightly fought 5-3 defeat of the London Knights on Friday night. The Kitchener native tied the game 1-1 early in the second period, connected with Pavel Gogolev for a second tying goal in the final frame, and added insurance on the empty net with 15 seconds left on the clock to seal the two-goal win. The 18-year-old winger sits third in Storm scoring with an even 25 goals and 25 assists for 50 points to his name through 55 appearances this season. Uba was drafted by the Flint Firebirds in the ninth round of the 2016 OHL Priority Selection, spending the 2016-17 season with the Ayr Centennials Jr. C club where he recorded 62 points (28-34—62) in 40 games played. He’d spend parts of the next season with the Wellington Dukes and Oakville Blades Jr. A before suiting up for the Firebirds for the entirety of the 2018-19 season and getting traded to the Storm in the summer of 2019.
• HIGHLIGHTS