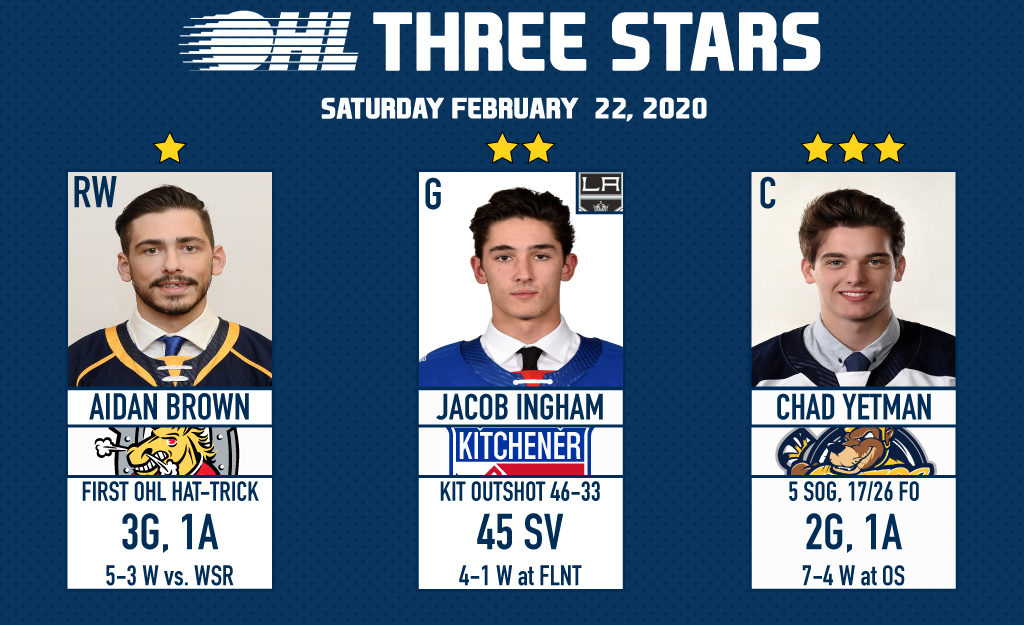 1ST STAR – AIDAN BROWN (BARRIE COLTS) – 3G, 1A
Overage winger Aidan Brown had a night to remember on Saturday, scoring his first career OHL hat-trick as the Barrie Colts defeated visiting Windsor 5-3. The Colts fell behind 2-0 but Brown went on to record a career-high four points on the night as the Colts won their third straight, climbing into a first place tie with the Sudbury Wolves atop the Central Division. A 20-year-old from Newmarket, Ont., Brown has a career-high 43 points (18-25–43) through 49 games this season. The fifth-year veteran was originally Barrie’s third round pick in the 2015 OHL Priority Selection and surpassed the 100 career point mark on Saturday.
• HIGHLIGHTS

2ND STAR – JACOB INGHAM (KITCHENER RANGERS) – 45 SV
Los Angeles Kings prospect Jacob Ingham stopped 45 of 46 as the Kitchener Rangers put an end to the Flint Firebirds’ 15-game winning streak. The Blueshirts took a 4-1 road win over the Firebirds despite being outshot 46-33 as Ingham stood tall and made the difference, improving to 29-7-4-1. The 6-foot-4, 198Ib. native of Barrie, Ont. owns a 2.86 goals-against average and .921 save percentage over 41 games this season. Saturday’s win was the 89th of his OHL career. Originally a second round pick of the Mississauga Steelheads in the 2016 OHL Priority Selection, Ingham was picked by LA in the sixth round of the 2018 NHL Draft.
• HIGHLIGHTS

3RD STAR – CHAD YETMAN (ERIE OTTERS) – 2G, 1A
Erie Otters forward Chad Yetman scored twice and added an assist in his team’s 7-4 road win over the Owen Sound Attack. Yetman extended his goal scoring streak to four games, potting a pair while going 17-for-26 in the faceoff circle as the Otters pulled into a seventh place tie with the Attack in the Western Conference. The recently-turned 20-year-old former 10th round pick from Whitby, Ont. leads the Otters with 36 goals this season for a total of 62 points (36-26–62) over 54 games. Yetman attended training camp with the Detroit Red Wings last September.
• HIGHLIGHTS