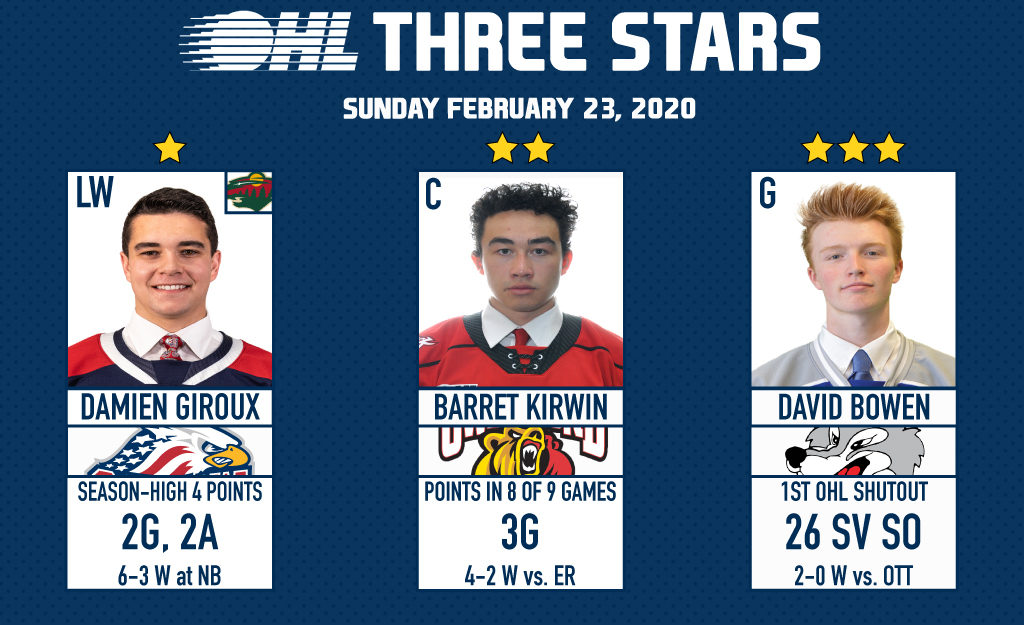 1ST STAR: DAMIEN GIROUX (SAGINAW SPIRIT) – 2G, 2A
Minnesota Wild prospect Damien Giroux scored his 38th and 39th goals of the season while also tacking on two assists as the Saginaw Spirit skated to a 6-3 victory in North Bay. The fourth-year captain extended his point streak to four games with the season-high four point effort as the Spirit clinched a spot in the 2020 OHL Playoffs. Giroux climbs within four goals of 100 on his OHL career, one spent entirely with the Spirit. The 19-year-old from Hanmer, Ont. was a third round pick by Saginaw in the 2016 OHL Priority Selection. He was selected by the Wild in the fifth round of the 2018 NHL Draft.
• HIGHLIGHTS

2ND STAR: BARRET KIRWIN (OWEN SOUND ATTACK): 3G
Barret Kirwin registered his first hat-trick of the season and third of his OHL career to lead his Owen Sound attack to a 4-2 defeat of the division rival Erie Otters. The 20-year-old centreman opened the scoring in the game’s five minutes, scored midway through the second period for a 3-1 lead, then added insurance with a second left on the clock to secure the win. The Barrie native sits third in Owen Sound scoring, boasting 29 goals and 57 points through 56 games in his fourth OHL season. Kirwin was drafted by the Guelph Storm in the 2016 OHL Priority Selection and spent two full seasons with them before being dealt to the Attack at last year’s deadline.
• HIGHLIGHTS

3RD STAR: DAVID BOWEN (SUDBURY WOLVES) – 26 SV SO
Sudbury Wolves netminder David Bowen saved all 26 shots he faced to earn his first OHL shutout against the CHL’s top seeded Ottawa 67’s in a 2-0 victory. The Unionville, Ont. native has suited up for a total of six games with the Wolves over the past three seasons, posting a 2.24 goals-against average, a .930 save percentage and a 3-1-1-0 record. In 23 games with the NOJHL’s Rayside-Balfour Canadians this season, Bowen is 18-4-0-0 with a 2.64 goals-against average, a .925 save percentage and two shutouts. He also made a brief stop this season with the QMJHL’s Drummondville Voltigeurs. Bowen was picked up by the Wolves in the 13th round of the 2016 OHL Priority Selection.
• HIGHLIGHTS