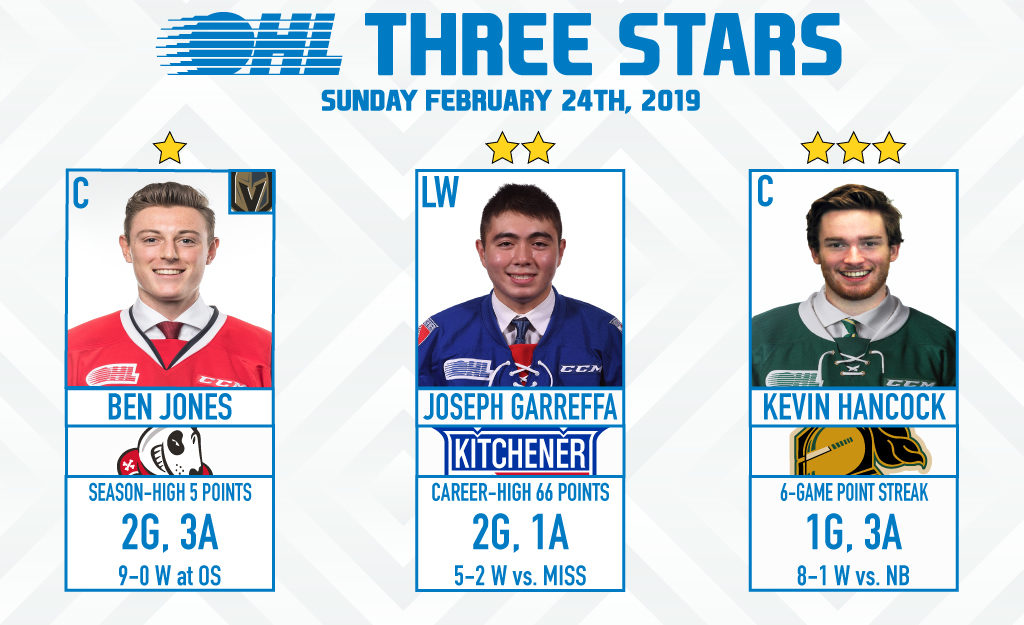 1ST STAR: BEN JONES (NIAGARA ICEDOGS):
Vegas Golden Knights prospect Ben Jones tied a career-high, recording five points in a 9-0 Niagara IceDogs road win over the Owen Sound Attack. Jones scored twice, added three assists and was 13-for-21 in the faceoff circle as the Dogs won their fourth straight, preserving their lead atop the Central Division. Jones has points in seven of his last eight games, contributing to a total of 90 (36-54–90) through 59 games this season. A 19-year-old from Waterloo, Ont., Jones was a seventh round pick by Vegas in the 2017 NHL Draft. He is a former first round (7th overall) pick by the IceDogs in the 2015 OHL Priority Selection from the Toronto Marlboros Minor Midgets.
• GAME HIGHLIGHTS

2ND STAR: JOSEPH GARREFFA (KITCHENER RANGERS):
Veteran forward Joseph Garreffa scored twice and added an assist in a 5-2 Kitchener Rangers win over visiting Mississauga. The diminutive 5-foot-7 winger potted his 23rd and 24th goals of the season while setting up Greg Meireles midway through the second period as the Rangers climbed past Owen Sound and into fifth in the Western Conference. A former third round pick by the Rangers in 2015, Garreffa struck a new career-high on Sunday, notching his 66th point (24-42–66) in his 59th game. Garreffa is in the midst of a six-game point streak, with multi-point outputs in five of those contests. The 19-year-old Toronto, Ont. native is a graduate of the Toronto Titans Minor Midget program.
• GAME HIGHLIGHTS

3RD STAR: KEVIN HANCOCK (LONDON KNIGHTS):
London Knights overage centreman Kevin Hancock continues to pile up the points, adding four more on Sunday as London defeated visiting North Bay 8-1. Hancock scored his 48th goal of the season with 29 seconds left in the opening period before adding three assists, increasing his point total to 98 (48-50–98) through 61 games this season. A dominant presence in the faceoff circle, Hancock was 13-for-20 at the dot on Sunday and now has points in six straight games. The 20-year-old Mississauga, Ont. native has 36 points (17-19–36) over 24 games since joining the Knights in early January. Now in his fourth full OHL season, Hancock has 282 points (116-166–282) over 257 career regular season games between London and Owen Sound.
• GAME HIGHLIGHTS

flint firebirds player of the week
OHL 'On the Run' Player of the Week: Tyler Tucker
16 hours ago