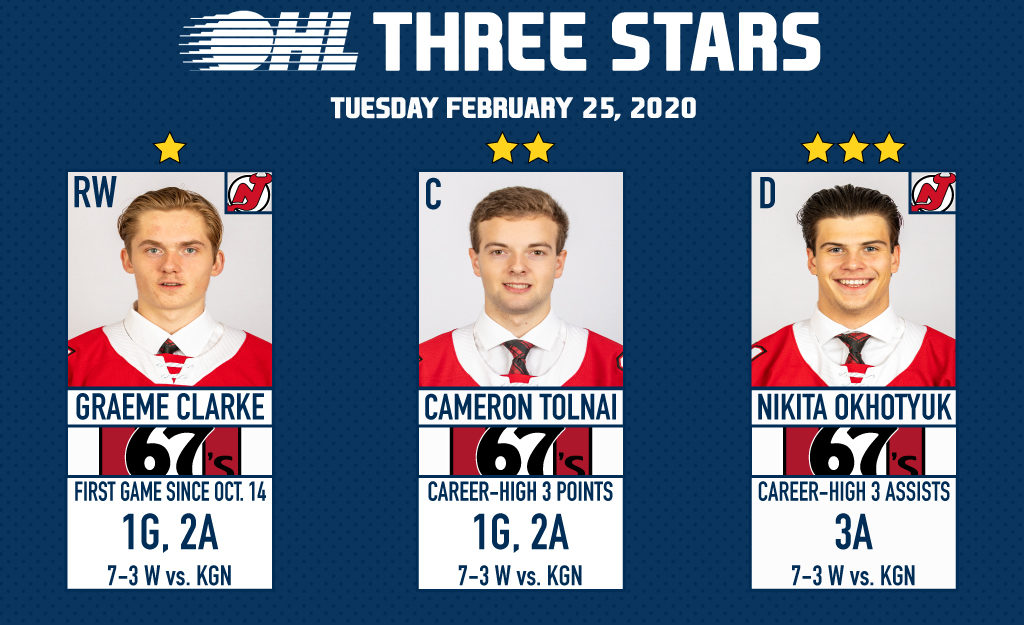 1ST STAR: GRAEME CLARKE (OTTAWA 67’S) – 1G, 2A
Third-year forward Graeme Clarke put together a three-point performance in his return to the Ottawa 67’s lineup, helping propel his team to a 7-3 win over the visiting Kingston Frontenacs. The hometown winger connected with teammates Cameron Tolnai and Alec Belanger to find the back of the net just three minutes in and added help on a power play goal by Tolnai before assisting overager Joseph Garreffa on his 32nd of the year. With his second three-point showing of the year, he now holds eight goals and 12 points over the 10 games he’s suited up for this season. Clarke was drafted sixth overall by the Barber Poles in the 2017 OHL Priority Selection and was picked up in the third round of last year’s NHL Draft by the New Jersey Devils.  A shoulder injury had kept the 18-year-old out of the lineup since mid-October.

2ND STAR: CAMERON TOLNAI (OTTAWA 67’S) – 1G, 2A
Sophomore skater Cameron Tolnai put up a career-high three points in Ottawa’s 7-3 win over Kingston on Tuesday. The Oakville native put forth an early goal for a 2-0 Ottawa lead and connected with both Graeme Clarke and Joseph Garreffa for two assists on the day. Tuesday’s performance puts the 18-year-old centreman at 16 points through 46 games (5-11—16) in his second year with the Barber Poles. Tolnai was a first round (sixth overall) selection of the 67’s in the 2018 OHL Priority Selection.

3RD STAR: NIKITA OKHOTYUK (OTTAWA 67’S) – 3A
Three assists from New Jersey Devils prospect Nikita Okhotyuk helped the Ottawa 67’s in their 7-3 takedown of the division rival Kingston Frontenacs. The 19-year-old defenceman added help on goals from Marco Rossi, Jack Quinn and Adam Varga in the win, bringing his season total up to 18 points (2-16—18) over 33 games in his third OHL stint. A native of Chelyabinsk, Russia, Okhotyuk was drafted 16th overall by Ottawa in the 2017 CHL Import Draft and was selected by New Jersey in the second round of last summer’s NHL Draft.