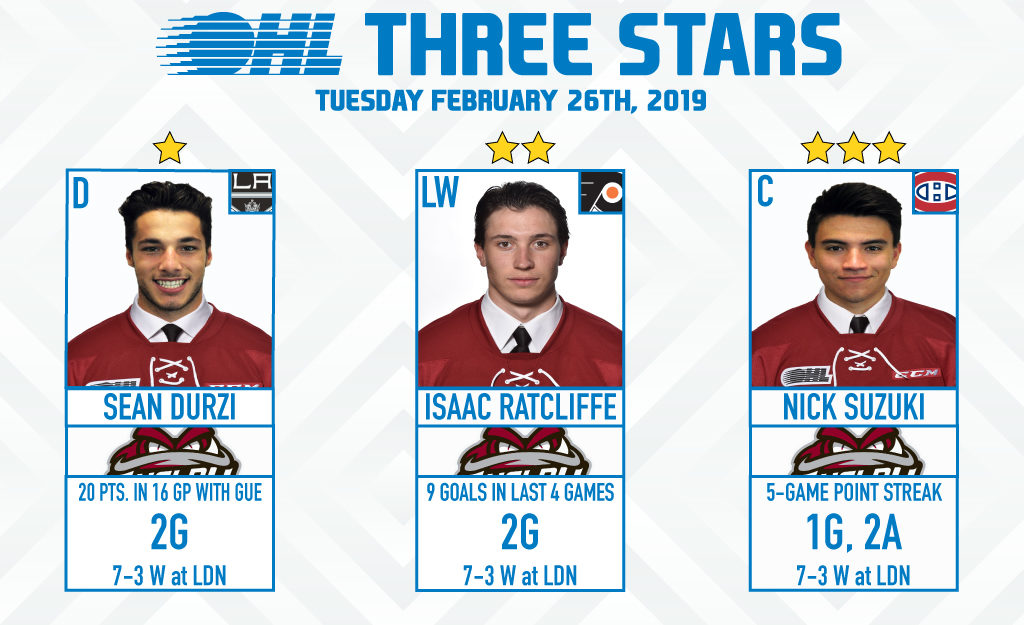 1ST STAR: SEAN DURZI (GUELPH STORM):
Los Angeles Kings prospect Sean Durzi potted a pair of goals as the Guelph Storm skated to a 7-3 win in London. The overage blueliner picked up his 10th and 11th goals of the season to give him 20 points (8-12–20) over 16 games as a member of the Guelph Storm. The former Owen Sound Attack defender has an impressive 140 career points (38-102–140) over 179 career regular season games between Guelph and Owen Sound. Originally a second round pick of the Toronto Maple Leafs last summer, Durzi was recently dealt to Los Angeles in a trade that saw the Leafs receive blueliner and former OHL Defenceman of the Year Jake Muzzin.

2ND STAR: ISAAC RATCLIFFE (GUELPH STORM):
Isaac Ratcliffe recorded his third straight multi-goal game following a pair of hat-tricks over the weekend. The 6-foot-6 Philadelphia Flyers prospect scored twice as the Storm took it to the London Knights 7-3 on the road. Ratcliffe now has 45 goals and 70 points over 56 games this season. The Storm captain is two goals away from climbing into second on the franchise’s all-time goal scoring list. Ratcliffe, who recently surpassed the 200-point plateau on his OHL career, was originally Guelph’s first round pick in the 2015 OHL Priority Selection from the London Jr. Knights Minor Midgets.

3RD STAR: NICK SUZUKI (GUELPH STORM):
Montreal Canadiens prospect Nick Suzuki had a goal and two assists on Tuesday, hitting the 30-goal mark for a third straight season as the Guelph Storm skated to a 7-3 road win over London. The 19-year-old Suzuki has 31 points (8-23–31) over 20 games since joining the Storm and a total of 76 points (30-46–76) over 50 games between Guelph and Owen Sound this season. A back-to-back Most Sportsmanlike Player Award recipient, Suzuki has stayed out of the box once again this season, accumulating just 12 minutes in penalties on the campaign. Suzuki now has points in five straight games. He recently represented Canada the 2019 IIHF World Junior Hockey Championship in Vancouver, BC.