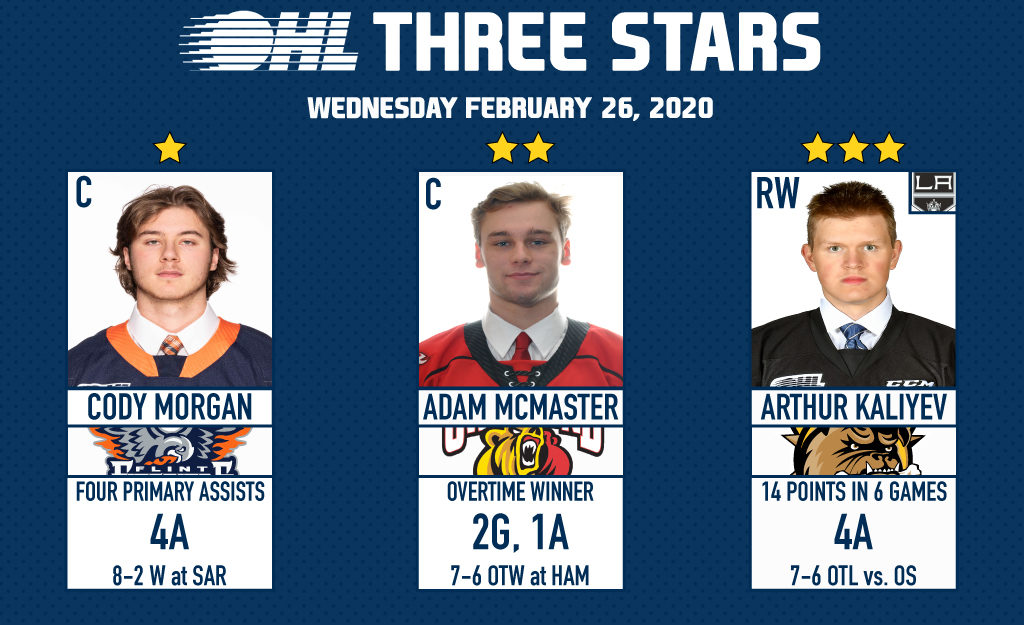 1ST STAR: CODY MORGAN (FLINT FIREBIRDS) – 4A
Third year skater Cody Morgan put up four primary helpers for his second four-point performance of the season to help propel the Flint Firebirds to an 8-2 blowout of the Sarnia Sting in their 12th consecutive road win. Over 58 games, the 19-year-old product of Maple, Ont. has amassed a career high 53 points (14-39—53). The 5-foot-11 centreman was the Kingston Frontenacs’ 12th overall pick in the 2017 OHL Priority Selection before being sent to the Firebirds in January of 2019.
• HIGHLIGHTS

2ND STAR: ADAM MCMASTER (OWEN SOUND ATTACK) – 2G, 1A
Adam McMaster netted a pair of goals including the overtime winner in the Owen Sound Attack’s 7-6 edging of the Hamilton Bulldogs. The 20-year-old centreman found the back of the net midway through the third period for a 5-4 lead and then 31 seconds into the extra frame to secure the win. The fourth year skater now holds 41 points (18-23—41) over 55 games. The Beamsville, Ont. native was originally selected 13th overall by the North Bay Battalion in the 2016 OHL Priority Selection and was traded to the Attack midway through the 2018-19 season.
• HIGHLIGHTS

3RD STAR: ARTHUR KALIYEV (HAMILTON BULLDOGS) – 4A
Los Angeles Kings prospect Arthur Kaliyev registered four assists as his Hamilton Bulldogs fell to the Owen Sound Attack 7-6 in overtime. The 18-year-old native of Staten Island, NY boasts an impressive 93 points (45-51—93) through 53 games this season, placing him fifth overall in the OHL scoring race. The third-year OHLer was scooped up 26th overall in the 2017 OHL Priority Selection and was drafted by Los Angeles with the 33rd overall pick of last year’s NHL Draft.
• HIGHLIGHTS