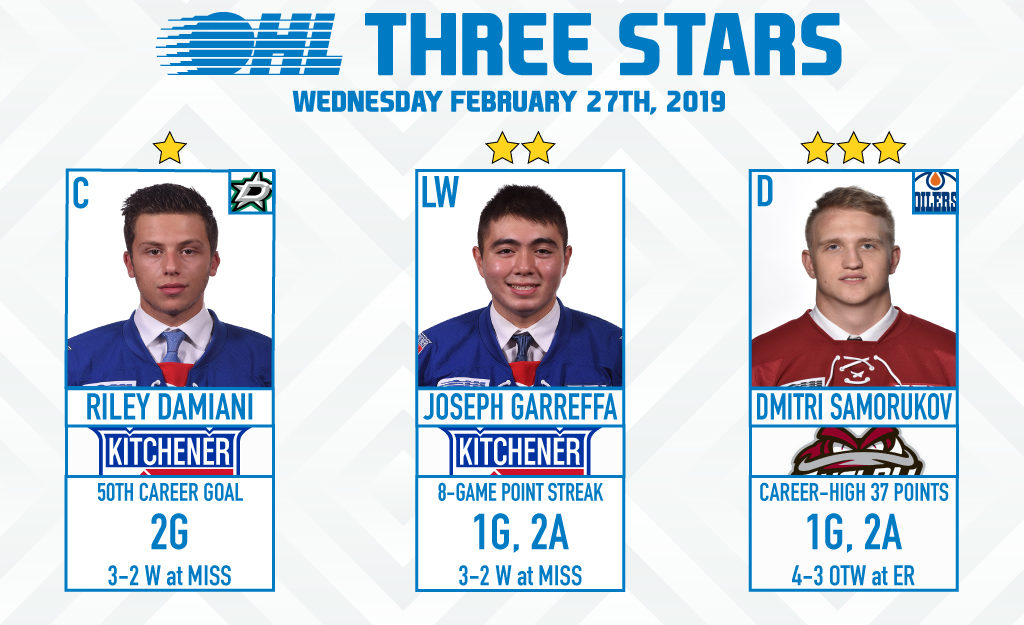 1ST STAR: RILEY DAMIANI (KITCHENER RANGERS):
Dallas Stars prospect Riley Damiani scored a pair of goals, helping the Kitchener Rangers claim a third straight win with a 3-2 triumph in Mississauga. Damiani scored the game winner just beyond the midway point of the second period as the Rangers led 3-0 and held on for two points. Damiani scored his 22nd and 23rd goals of the season for a total of 70 points (23-47–70) over 50 games. The 18-year-old from Mississauga, Ont. is in his third season with the Rangers and picked up the 50th goal of his OHL career on Wednesday. Damiani was Dallas’ fifth round pick in the 2018 NHL Draft.
• GAME HIGHLIGHTS

2ND STAR: JOSEPH GARREFFA (KITCHENER RANGERS):
Joseph Garreffa stretched his point streak to eight games with a goal and two assists in Wednesday’s 3-2 victory in Mississauga. Garreffa teamed up with Alexey Lipanov and Kyle Gentles to pot a career high-matching 25th goal of the season before chipping in with assists on a pair of goals by Riley Damiani. The 19-year-old Garreffa has 69 points (25-44–69) over 60 games in this, his fourth OHL season. Wednesday’s win was Garreffa’s second straight three point game. He was Kitchener’s third round pick in the 2015 OHL Priority Selection from the Toronto Titans Minor Midgets.
• GAME HIGHLIGHTS

3RD STAR: DMITRI SAMORUKOV (GUELPH STORM):
Edmonton Oilers prospect Dmitri Samorukov suffered a broken nose in London on Tuesday, returning to set up the overtime winner as the Guelph Storm took a 3-2 win in Erie on Wednesday. Samorukov had a goal and two assists, scoring his sixth of the season on the power play inside the final minute of the first period. The 19-year-old native of Volgograd, Russia has 37 points (6-31–37) over 52 games this season and is approaching the 100-point milestone on his OHL career. Samorukov represented Russia at the IIHF World Junior Hockey Championship for a second straight year. He was Edmonton’s third round pick in the 2017 NHL Draft.
• GAME HIGHLIGHTS