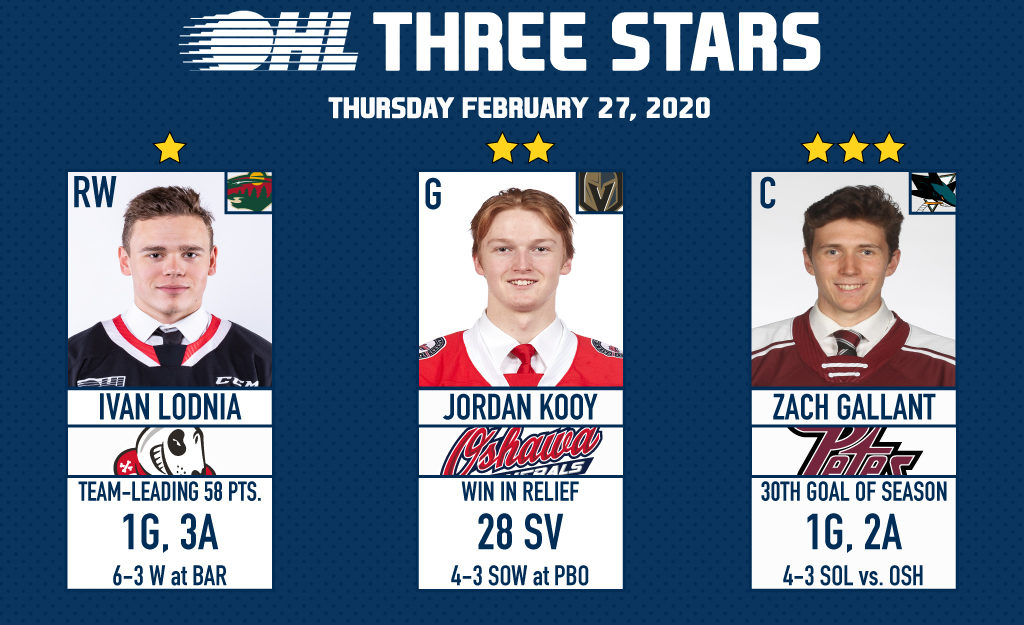 1ST STAR: IVAN LODNIA (NIAGARA ICEDOGS) – 1G, 3A
Minnesota Wild prospect Ivan Lodnia fueled the Niagara IceDogs to their 6-3 defeat of the Barrie Colts, crushing the team’s 14-game losing streak. The OHL vet found the back of the net at the 19:58 marker of the opening frame for a 3-1 lead and added help on goals from teammates Mason Howard, Cameron Butler and Adrien Beraldo within the first half of the game. The Novi, MI native has amassed a team-leading 58 (24-34—58) in just 36 games through his fifth OHL season, having missed a month due to a lower-body injury. Lodnia was drafted 20th overall by the Erie Otters at the 2015 OHL Priority Selection and was traded to the IceDogs ahead of the 2018-2019 season. He was selected by Minnesota in the third round of the 2017 NHL Draft.
• HIGHLIGHTS

2ND STAR: JORDAN KOOY (OSHAWA GENERALS) – 28 SVS
Oshawa Generals netminder Jordan Kooy saved all 28 shots he faced in relief to help his team crawl back from a 3-0 deficit and complete the comeback win 4-3 in a shootout. The 19-year-old native of Bradford, Ont. holds a .896 save percentage and 3.44 goals-against average over the 18 games he’s suited up for with the Generals. An eighth round pick of the London Knights at the 2016 OHL Priority Selection, Kooy was sent to the Sarnia Sting earlier this season before being dealt to the Gens. He was drafted by the Vegas Golden Knights at the 2018 NHL Draft.
• HIGHLIGHTS

ZACH GALLANT (PETERBOROUGH PETES) – 1G, 2A
Peterborough overager Zach Gallant put up a three-point performance in the Petes’ 4-3 shootout loss at the hands of the East Division rival Oshawa Generals. The product of Oakville, Ont. scored 36 seconds into the middle frame to lift the Petes up 2-0 and had a hand in goals by Akil Thomas and Liam Kirk. The OHL veteran boasts a career high 30 goals and 57 points over 55 games in his fifth season, placing him fifth among Peterborough scorers. Gallant was the fifth overall draft pick of the 2015 OHL Priority Selection. He was chosen by the Detroit Red Wings in the third round of the 2017 NHL Draft and later signed with the San Jose Sharks as a free agent in 2019.
• HIGHLIGHTS