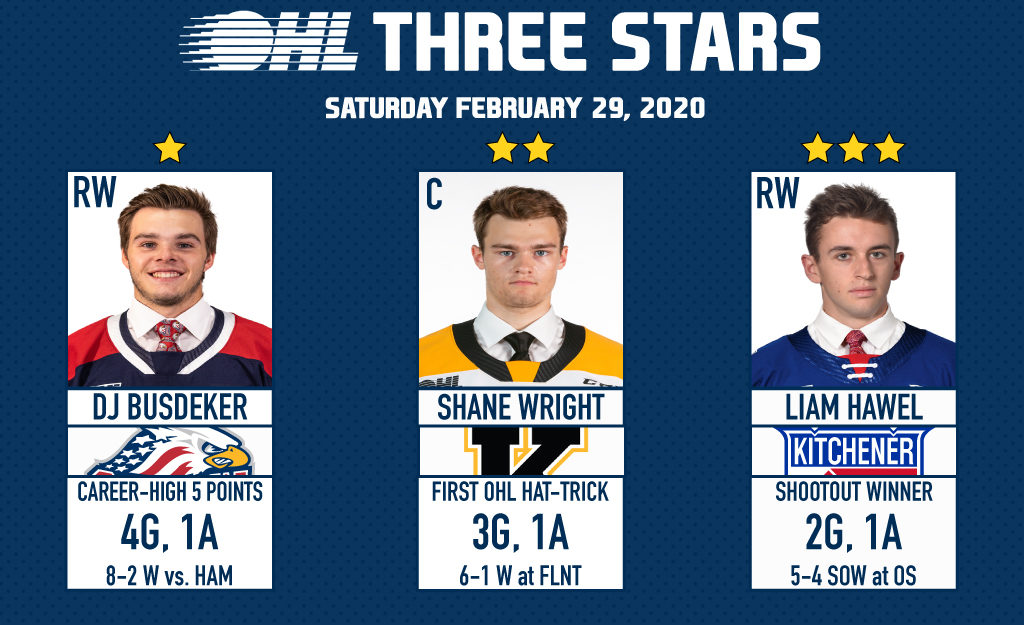 1ST STAR: DJ BUSDEKER (SAGINAW SPIRIT) – 4G, 1A
Saginaw Spirit veteran DJ Busdeker had a career night, scoring four times while adding an assist to lead his club past the Hamilton Bulldogs 8-2. Busdeker logged the Spirit’s first four-goal performance of the season, recording a natural hat-trick in the first period to improve his total to 22 goals, 34 assists and 56 points over 59 games in his overage campaign. The 20-year-old native of Dexter, Mich. recently spent some time back on the blue line for the Spirit but has since moved up to forward upon Bode Wilde’s return to the lineup. Busdeker has registered 145 points (54-91–145) over 232 career regular season games since being signed as a free agent prior to the 2016-17 season.
• HIGHLIGHTS

2ND STAR: SHANE WRIGHT (KINGSTON FRONTENACS) – 3G, 1A
Shane Wright had a night to remember in Flint, recording his first career OHL hat-trick as the Kingston Frontenacs defeated the Firebirds 6-1. Wright recorded a natural hat-trick en route to a four-point night as he surpassed Bernie Nicholls for the most goals by rookie in franchise history with his 37th of the campaign. Wright’s 66 points (39-27–66) through 54 games equal Connor McDavid’s total as a member of the Erie Otters during his exceptional status season in 2012-13, though McDavid’s 66 points came in 63 games. The first overall pick of the 2019 OHL Priority Selection, Wright recorded 24 points (14-10–24) over 13 February contests.
• HIGHLIGHTS

3RD STAR: LIAM HAWEL (KITCHENER RANGERS) – 2G, 1A
Overage veteran Liam Hawel scored twice and added an assist to help the Kitchener Rangers rally from a 4-1 deficit, eventually defeating the Owen Sound Attack 5-4 on his shootout winner. Hawel’s fifth three-point performance of the season helped Kitchener stretch its winning streak to five games to sit atop the Western Conference standings. The 6-foot-4, 195Ib. native of Arnprior, Ont. has 64 points (21-43–64) over 50 games with the Rangers this season. Hawel won an OHL Championship with the Guelph Storm in 2018-19. He attended training camp with the Montreal Canadiens last September.
• HIGHLIGHTS