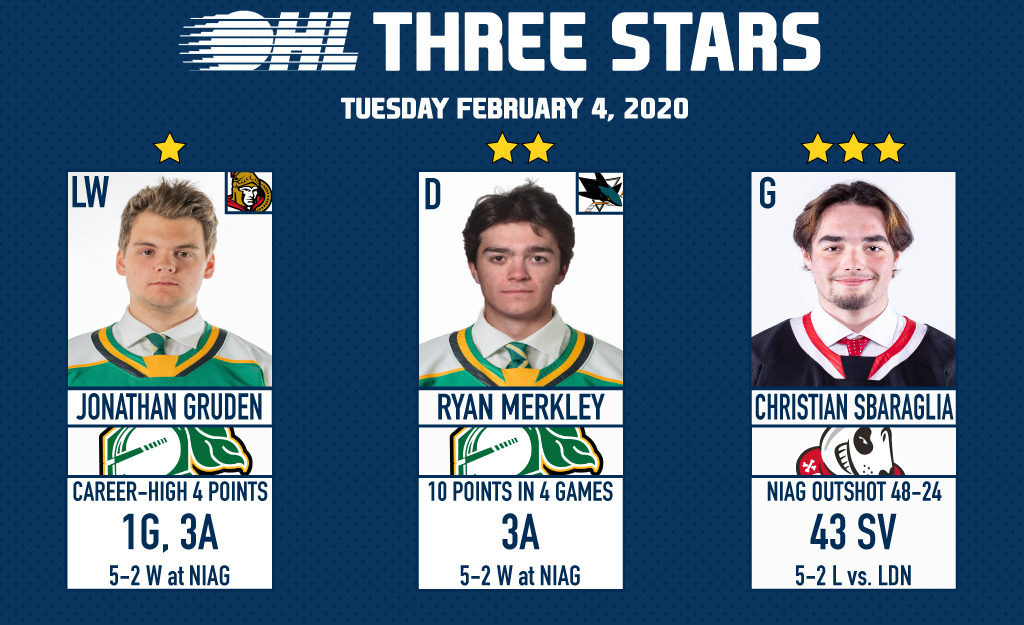 1ST STAR: JONATHAN GRUDEN (LONDON KNIGHTS) – 1G, 3A
Ottawa Senators prospect Jonathan Gruden scored his 22nd goal of the season and tacked on three assists as the London Knights defeated the Niagara IceDogs 5-2 on the road. Gruden’s four points are a season high as the first-year forward from Rochester Hills, Mich. has 55 points (22-33–55) over 47 contests. The 19-year-old was a fourth round pick of the Senators in the 2018 NHL Draft.

2ND STAR: RYAN MERKLEY (LONDON KNIGHTS) – 3A
San Jose Sharks prospect Ryan Merkley put together his third straight three-point performance as the London Knights captured their ninth consecutive win in Niagara on Tuesday. Merkley collected three assists to bring his season point total to 60 (12-48–60), the second-most among OHL defencemen. It marks the third straight season that Merkley has put up at least 60 points. He was a first round pick of San Jose in the 2018 NHL Draft and was chosen by the Guelph Storm with the first overall pick of the 2016 OHL Priority Selection.

3RD STAR: CHRISTIAN SBARAGLIA (NIAGARA ICEDOGS) – 43 SV
Niagara IceDogs netminder Christian Sbaraglia stood tall, turning aside 43 shot as his team was heavily outshot in a 5-2 loss to the London Knights on Tuesday. Sbaraglia surrendered four goals before the Knights sealed the deal with an empty netter. The 18-year-old is 3-11-1-0 on the season with a 4.88 goals-against average and .884 save percentage. He was Niagara’s sixth round pick in the 2017 OHL Priority Selection.