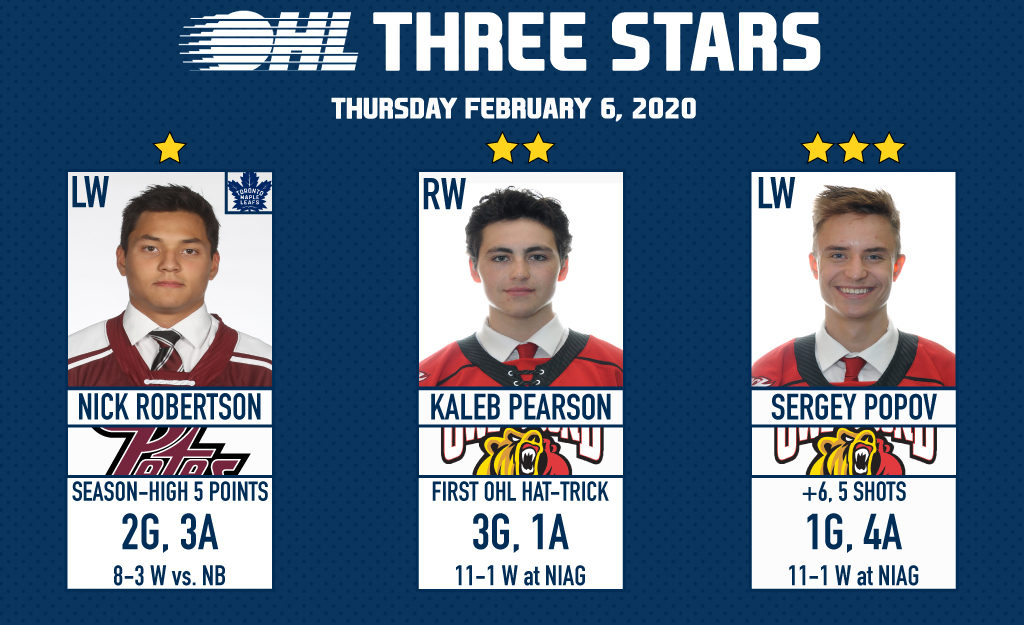 1ST STAR: NICK ROBERTSON (PETERBOROUGH PETES) – 2G, 3A
Nick Robertson reached 41 goals on the season in a five-point performance (2-3—5) that helped push his Peterborough Petes past the North Bay Battalion by a lopsided score of 8-3. Robertson scored twice in a row, one of which was shorthanded, to help his team to a 5-1 lead towards the end of the second period. The third-year winger ties Jack Quinn of the Ottawa 67’s for the league’s current top goal scorers and is riding a 13-game goal streak. Robertson, drafted 16th overall by the Petes in 2016, was selected in the second round of last year’s NHL Draft by the Toronto Maple Leafs.
• HIGHLIGHTS

2ND STAR: KALEB PEARSON (OWEN SOUND ATTACK) – 3G, 1A
Kaleb Pearson scored his first OHL hat-trick and later added an assist in the Owen Sound Attack’s 11-1 toppling of the Niagara IceDogs on Thursday night. The native of St. Marys, Ont. scored in the first period for a 2-0 lead, and then twice in the second period to bring the Attack up 6-1. Through the first 49 games of his sophomore season with the club, 19-year-old Pearson has amassed 20 goals and 36 points. He was picked up by the Flint Firebirds in the second round of the 2017 OHL Under-18 Priority Selection and was traded to the Attack in the 2018 offseason.
• HIGHLIGHTS

3RD STAR: SERGEY POPOV (OWEN SOUND ATTACK) – 1G, 4A
Sergey Popov put up a goal and four helpers in the Attack’s 11-1 surge over the host IceDogs. He found the back of the net within the game’s final five minutes for his team’s 11th and final goal of the night. Popov, a 19-year-old native of Korolev, Russia, leads the Attack with 57 points (15-42—57) in 49 games this season. He was drafted by the Kingston Frontenacs at the 2016 OHL Priority Selection, and spending time on the Kingston and London Knights rosters before joining the Attack midway through the 2017-18 season.
• HIGHLIGHTS