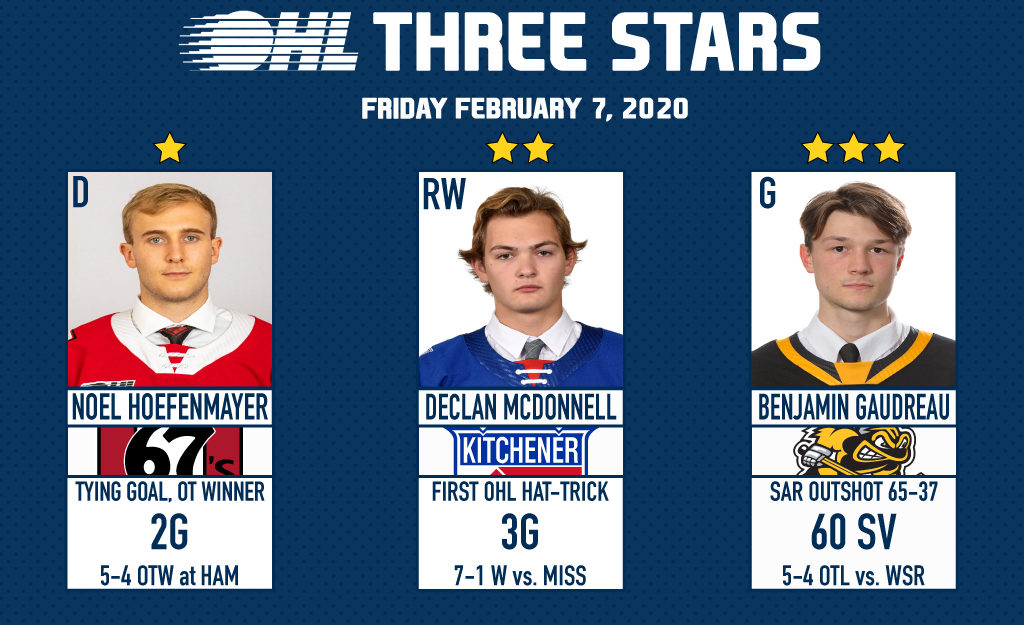 1ST STAR: NOEL HOEFENMAYER (OTTAWA 67’s) – 2G
Noel Hoefenmayer did a bit of everything on Friday, pulling a puck off the Ottawa goal line in the first period before later scoring by the tying and game winning goals as the 67’s extended their winning streak to 10 games. Ottawa crawled out of a 3-0 hole, coming back to win it after Hoefenmayer scored the tying goal with 18 seconds left in regulation before scoring his 21st of the season for the difference maker. The 21-year-old from North York leads OHL defencemen with 69 points (21-48–69) this season and sits atop the league with a plus-44 rating. A former fourth round pick of the Arizona Coyotes in 2017, Hoefenmayer is currently an NHL free agent.
• HIGHLIGHTS

3RD STAR – BENJAMIN GAUDREAU (SARNIA STING) – 60 SV
Sarnia Sting rookie Benjamin Gaudreau got a workout on Friday, making 60 saves to help his team earn a point in a 5-4 overtime loss to visiting Windsor. Sarnia was heavily outshot 65-37 but Gaudreau did his part with his season-high 60 save effort. The 17-year-old from Corbeil, Ont. was selected by Sarnia with the seventh overall pick of the 2019 OHL Priority Selection. He’s 6-9-0-0 with a 4.38 goals-against average and .890 save percentage through 18 games. Gaudreau represented Canada Black at the 2019 World Under-17 Hockey Challenge.
• HIGHLIGHTS