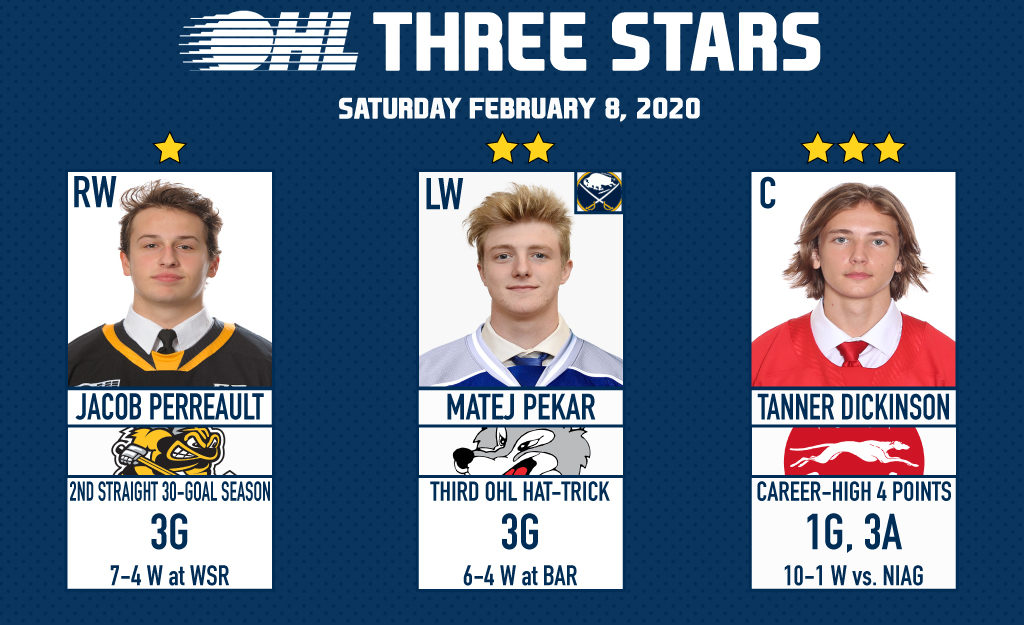 1ST STAR: JACOB PERREAULT (SARNIA STING) – 3G
2020 NHL Draft prospect Jacob Perreault scored a hat-trick to secure his second straight 30-goal season as the Sarnia Sting got out of a nine-game rut. The Sting avenged Friday’s loss to the Windsor Spitfires, defeating them 7-4 on the road as Perreault scored three times and racked up nine shots on goal. The 17-year-old from Hinsdale, Ill. has 58 points (31-27–58) over 46 games this season and recently competed in the Kubota CHL/NHL Top Prospects Game. Perreault was Sarnia’s first round (19th overall) pick in the 2018 OHL Priority Selection.
• HIGHLIGHTS

2ND STAR: MATEJ PEKAR (SUDBURY WOLVES) – 3G
Buffalo Sabres prospect Matej Pekar scored three times to lead the Sudbury Wolves over his former club, the Barrie Colts by a score of 6-4. Pekar, who had just one goal in his past six games, busted out in a big way as the Wolves earned a big win and he increased his totals to 46 points (22-24–46) over 39 contests. The soon-to-be 20-year-old from Turnov, Czech Rep. is in his second OHL season. He was Buffalo’s fourth round pick in the 2018 NHL Draft.
• HIGHLIGHTS

3RD STAR: TANNER DICKINSON (SOO GREYHOUNDS) – 1G, 3A
Soo Greyhounds rookie Tanner Dickinson registered a career-high four points in a 10-1 win over visiting Niagara. Dickinson scored his fifth goal of the season and added three assists to give him 31 points (5-26–31) over 52 games. The 17-year-old from Perrysburg, Ohio was signed by the Greyhounds as an undrafted free agent last summer.
• HIGHLIGHTS