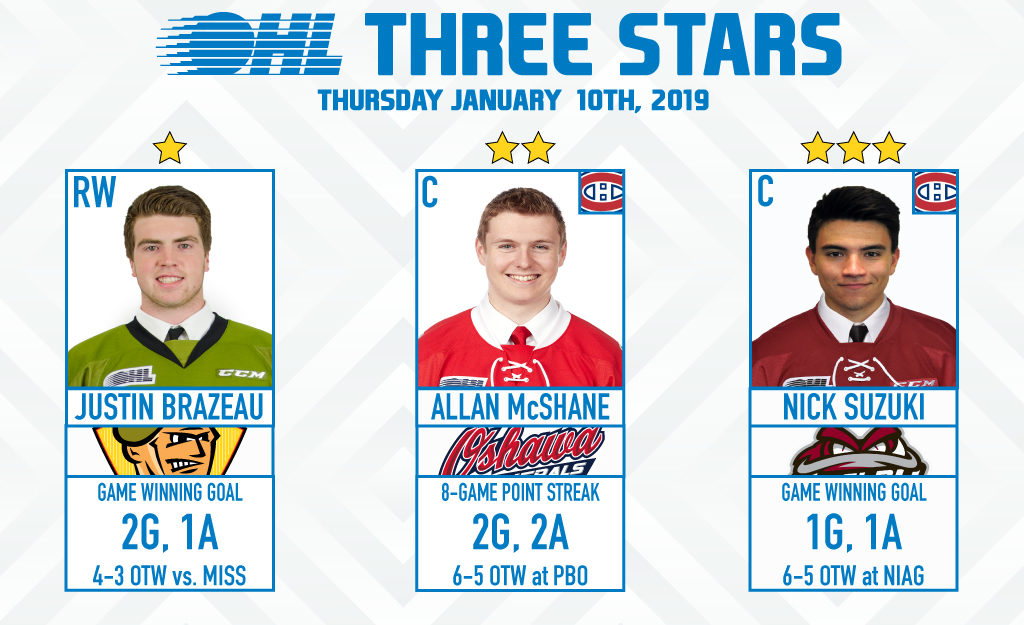 1ST STAR: JUSTIN BRAZEAU (NORTH BAY BATTALION):
Justin Brazeau reclaimed the OHL scoring lead, netting the overtime winner as the North Bay Battalion earned their ninth win in the past 10 games, defeating the visiting Mississauga Steelheads 4-3. Brazeau’s second of the night and career-high matching 39th goal of the season came on a breakaway 2:33 into overtime. The 6-foot-6 native of New Liskeard, Ont. has 71 points (39-32–71) over 41 games this season and is four points shy of the 200-point plateau on his OHL career. The former 13th round pick by North Bay in 2014 is in his fourth season with the Battalion, helping them continue their hot streak of late as they improved to 20-18-1-2.
• GAME HIGHLIGHTS

2ND STAR: ALLAN McSHANE (OSHAWA GENERALS):
Montreal Canadiens prospect Allan McShane stretched his point streak to eight games, recording two goals and two assists as the Oshawa Generals took a 6-5 overtime win in Peterborough. McShane picked up an assist on Serron Noel’s overtime winner while also scoring his 18th and 19th goals of the season to give him 36 points (19-17–36) in as many games. The 18-year-old from Collingwood, Ont. has goals in six of his last eight games as the Generals hold down second place in the East Division. Originally a first round pick of the Erie Otters in the 2016 OHL Priority Selection, McShane was a fourth round choice of the Montreal Canadiens this past summer.
• GAME HIGHLIGHTS

3RD STAR: NICK SUZUKI (GUELPH STORM):
Another Montreal Canadiens prospect, Nick Suzuki made an impression in his Guelph Storm debut. The 19-year-old scored a highlight reel overtime winner, helping the Storm defeat the Central Division-leading Niagara IceDogs 6-5 on the road after teammate Nate Schnarr tied the score at five with just seven seconds left in the third period. Suzuki’s 23rd goal of the season gives him 47 points (23-24–47) over 31 games this season. The London, Ont. native has points in five straight contests and recently represented Canada at the 2019 IIHF World Junior Hockey Championship. After being a first round pick of the Vegas Golden Knights in 2017, Suzuki’s rights were dealt to the Montreal Canadiens in September 2018.
• GAME HIGHLIGHTS