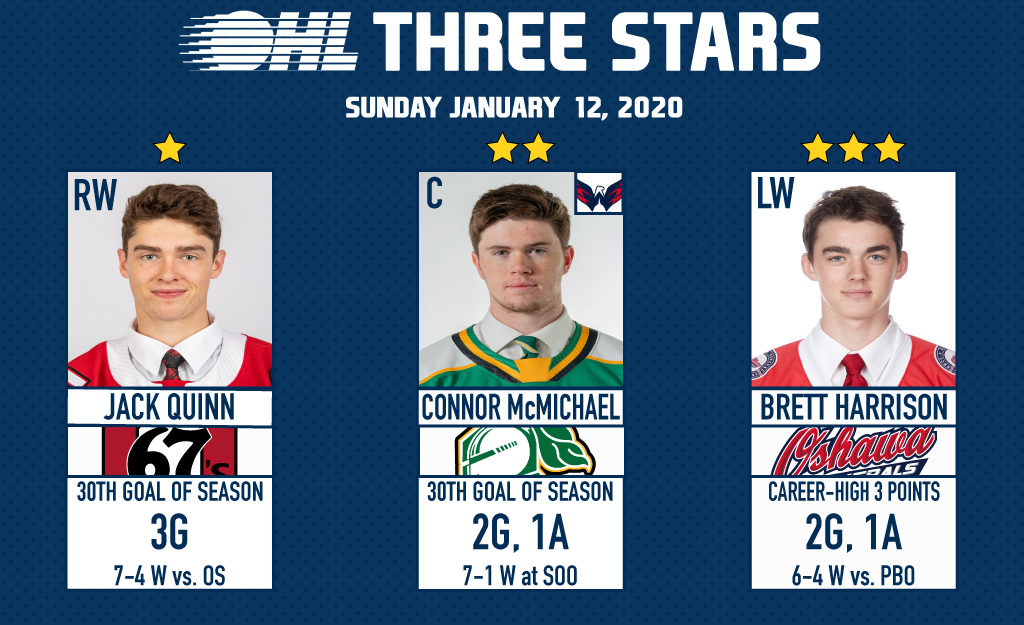 1ST STAR: JACK QUINN (OTTAWA 67’S) – 3G, 2ND HAT-TRICK IN 5 GAMES
NHL Draft prospect Jack Quinn collected his second hat-trick in just five games in a 7-4 Ottawa win over the Owen Sound Attack. The 18-year-old product of nearby Cobden, Ont. found the back of the net midway through the first period and twice in the final frame to reach his 30th goal on the season. The 6-foot-1 winger now boasts 48 points (30-18-48) through 38 games with the Barber Poles this season, a fifth-best total among Ottawa skaters. Quinn was a second round draft pick in the 2017 OHL Priority Selection and put up 46 points (21-25-46) in 49 games with the CCHL’s Kanata Lasers during the 2017-2018 season. He’ll compete in this week’s Kubota CHL/NHL Top Prospects Game in Hamilton.
• HIGHLIGHTS

2ND STAR: CONNOR MCMICHAEL (LONDON KNIGHTS) – 2G, 1A
Washington Capitals prospect Connor McMichael of the London Knights had a pair of goals, including one of the highlight reel variety, while also tacking on an assist in a 7-1 road win over the Soo Greyhounds. McMichael scored his 29th and 30th goals of the season in the first and second periods and later assisted on a power play goal from Liam Foudy. The 19-year-old from Ajax, Ont. has 66 points (30-36–66) in 30 games this season, tied for fifth in OHL scoring. McMichael recently won gold with Canada at the 2020 IIHF World Junior Hockey Championship in Ostrava, Czech Republic. He was Washington’s first round (25th overall) pick last summer.
• HIGHLIGHTS

3RD STAR: BRETT HARRISON (OSHAWA GENERALS) – 2G, 1A, CAREER-HIGH 3-POINT NIGHT
Oshawa Generals rookie Brett Harrison notched a pair of goals and one assist for a career-high three point night as his team skated to a 6-4 win past the East Division rival Peterborough Petes. The 16-year-old centreman from London, Ont. scored a power play goal to make it 2-1 in the first, then found the back of the net again 1:20 into the third period for a 5-2 score. He picked up the assist on Philip Tomasino’s first of two goals on the night. Harrison holds 26 points (14-12-26) through his first 35 games with the Gens, placing him third among all rookie scorers. Before being drafted 16th overall at the 2019 OHL Priority Selection, the Dorchester, Ont. native totaled 63 points (42-21-63) in 33 games with the London Jr. Knights.
• HIGHLIGHTS