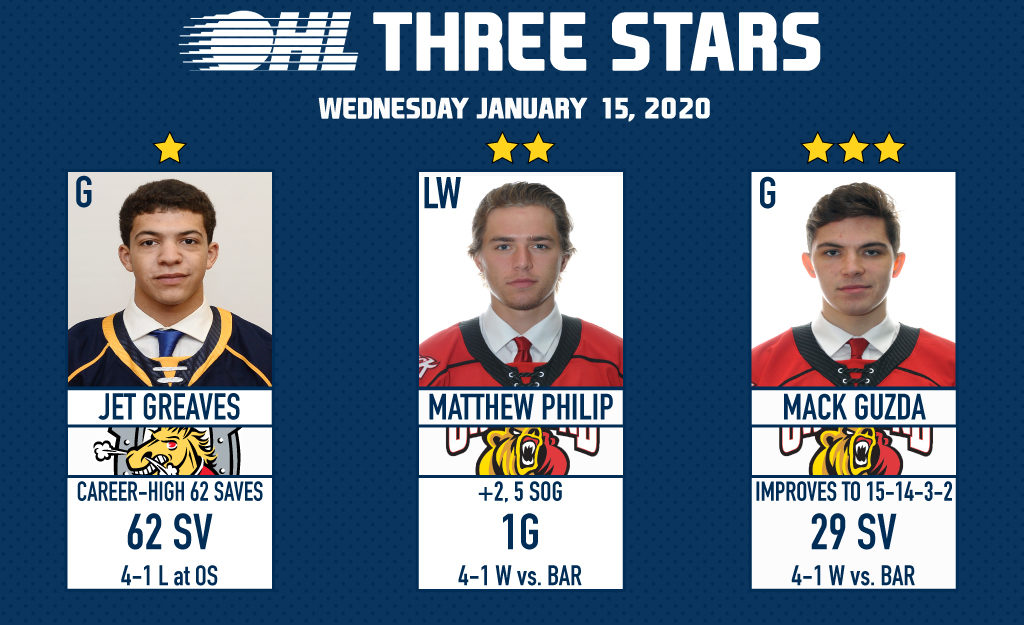 1ST STAR: JET GREAVES (BARRIE COLTS) – 62 SV
Barrie Colts netminder Jet Greaves recorded a career-high 62 saves on 66 shots faced in a 4-1 loss to the Owen Sound Attack on Wednesday. The 18-year-old product of Cambridge, Ont. holds an .888 save percentage and a 3.98 goals-against average through 21 games between the pipes this season. He finished his rookie year with a .911 save percentage and 3.36 goals-against average over 27 games played. Greaves was Barrie’s third round pick in the 2017 OHL Priority Selection.

2ND STAR: MATTHEW PHILIP (OWEN SOUND ATTACK) – 1G
Overager Matthew Philip’s 17th goal of the season was one for the highlight reel. The 20-year-old forward skated all the way across the ice to beat Jet Greaves for his team’s fourth goal of the night, capping off a 4-1 victory over the Barrie Colts. Through 41 games with the Attack this season, Philip has posted 24 points (17-7-24). A ninth round pick of the Niagara IceDogs in the 2015 OHL Priority Selection, the Ilderton, Ont. native spent three seasons with the IceDogs before being acquired by the Attack in the offseason.

3RD STAR: MACK GUZDA (OWEN SOUND ATTACK) – 29 SVS
Third year Owen Sound Attack netminder Mack Guzda finished with a 29-shot total on the 30 shots he faced in his team’s 4-1 win against the Barrie Colts. The 19-year-old from Knoxville, Tenn. boasts an .899 save percentage with a 3.33 goals-against average through the first 34 games of his third OHL season. Guzda holds an overall .886 save percentage and 3.43 goals-against average through 113 games in net for the Attack over the course of three campaigns. He was picked up by Owen Sound in the second round of the 2017 OHL Priority Selection.