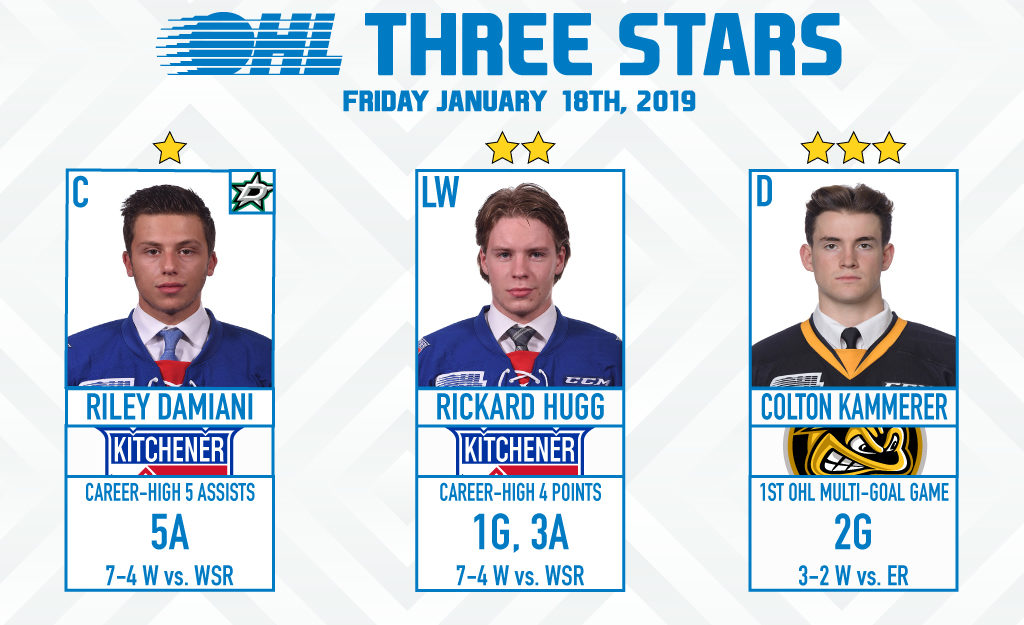 1ST STAR: RILEY DAMIANI (KITCHENER RANGERS):
Dallas Stars prospect Riley Damiani picked up a career-high five assists as the Kitchener Rangers defeated visiting Windsor 7-4. Damiani becomes the first Rangers player to collect five assists in a game since Jason Akeson did so back in December 2010. Damiani has 44 points (16-28–44) over 33 games this season and points in seven of his last eight games. The 18-year-old from Mississauga, Ont. is in his third season with the Rangers after being a second round pick by the club in 2016 from the Mississauga Rebels Minor Midgets. Damiani was a fifth round pick of Dallas in 2018.
• GAME HIGHLIGHTS

2ND STAR: RICKARD HUGG (KITCHENER RANGERS):
Rickard Hugg celebrated his 20th birthday in style, recording a career-high four points as the Kitchener Rangers soared over the visiting Windsor Spitfires. The 7-4 win included a goal and three assists from Hugg as the Rangers tightened their grip on the eighth spot in the Western Conference. The Hudiksvall, Sweden native has 43 point (17-26–43) over 37 games this season, equalling last year’s mark of 26 assists accumulated over 66 games. Hugg recently represented Sweden at the 2019 IIHF World Junior Hockey Championship.
• GAME HIGHLIGHTS

3RD STAR: COLTON KAMMERER (SARNIA STING):
Sophomore defenceman Colton Kammerer recorded his first career multi-goal outing, scoring twice as the Sarnia Sting snapped a seven-game slide with a 3-2 defeat of the visiting Erie Otters. Kammerer scored the second period game winner with a seeing-eye shot from the point as the Sting returned to the .500 mark in the West Division standings. The 17-year-old native of Brooklin, Ont. has 10 points (3-7–10) over 37 games in his second year with the Sting. The Whitby Wildcats Minor Midget graduate is a former third round pick of Sarnia in 2017.
• GAME HIGHLIGHTS