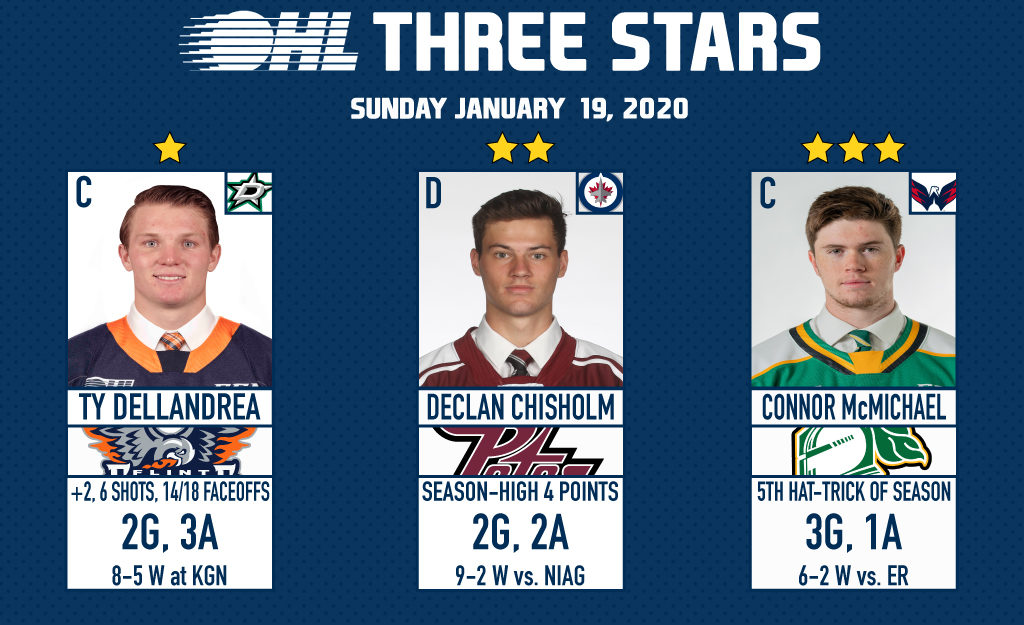 1ST STAR: TY DELLANDREA (FLINT FIREBIRDS) – 2G, 3A
Dallas Stars first rounder Ty Dellandrea was an integral force in the Flint Firebirds’ 8-5 comeback win in Kingston on Sunday. The 19-year-old centreman registered a pair of consecutive goals late in the second period to kickstart a five-goal barrage that would see the Firebirds climb back from a 4-2 deficit. Dellandrea also registered three assists in the afternoon victory, bringing his point total to 47 on the year (20-27-47). The product of Port Perry, Ont. was chosen fifth overall at the 2016 OHL Priority Selection and was picked up 13th overall by the Stars at the 2018 NHL Draft. Dellandrea recently won a gold medal with Team Canada at the World Junior Championships.
• HIGHLIGHTS

2ND STAR: DECLAN CHISHOLM (PETERBOROUGH PETES) – 2G, 2A
Peterborough Petes defenceman Declan Chisholm’s season-high four-point performance helped his team to a lopsided 9-2 victory past the Niagara IceDogs on Sunday. The 20-year-old scored the Petes’ first goal in the opening frame to tie the score 1-1 and again in the third period to lift them up 7-2. Chisholm, a native of Bowmanville, Ont., now totals nine goals and 52 points through the first 43 points of his fourth season. He was a second round pick of the Petes at the 2016 OHL Priority Selection and was selected in the fifth round of the 2018 NHL Draft by the Winnipeg Jets.
• HIGHLIGHTS

3RD STAR: CONNOR MCMICHAEL (LONDON KNIGHTS) – 3G, 1A
Washington Capitals first round pick Connor McMichael recorded his fifth hat-trick of the season, powering the London Knights past the visiting Erie Otters 6-2. McMichael tacked on an assist in the win and finished with seven shots on goal along with an 8-for-14 afternoon in the faceoff circle. The 19-year-old from Ajax, Ont. has 71 points (33-38–71) over 32 games this season, good for third in the OHL. The Canadian National Junior Team gold medalist is in the midst of a seven-game point streak. He was the 25th overall pick of the NHL Draft last summer.
• HIGHLIGHTS