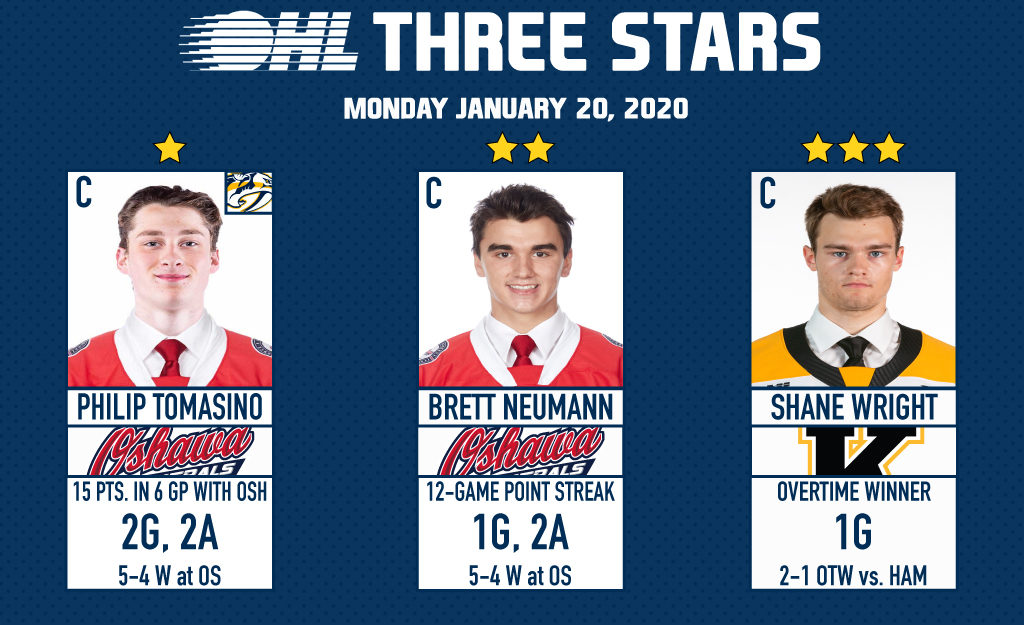 1ST STAR: PHILIP TOMASINO (OSHAWA GENERALS) – 2G, 2A
Nashville Predators prospect Philip Tomasino continued racking up points as an Oshawa General, scoring twice while adding two assists in Monday’s 5-4 road win over the Owen Sound Attack. Tomasino set up Allan McShane for the third period game winner and finished the game with five shots on goal and an 8-for-17 rate in the faceoff circle. The 18-year-old from Mississauga, Ont. has 72 points (30-42–72) over 42 games this season, with 15 of those points (8-7–15) coming in six games with Oshawa. Tomasino was the 24th overall pick of the 2019 NHL Draft.
• HIGHLIGHTS

2ND STAR: BRETT NEUMANN (OSHAWA GENERALS) – 1G, 2A
Oshawa Generals overage forward Brett Neumann had a goal and two assists as the Oshawa Generals skated to a 5-4 win in Owen Sound. Neumann teamed up with linemate Philip Tomasino to score his 33rd goal of the season with under four minutes to go in the first period and later added a pair of assists. The 20-year-old from Toronto, Ont. has points in 12 straight contests for an overall total of 63 (33-30–63) through 42 games this season. Neumann is two games shy of 300 on his OHL career, producing 224 (116-108–224) career points in that span.
• HIGHLIGHTS

3RD STAR: SHANE WRIGHT (KINGSTON FRONTENACS) – 1G
Kingston Frontenacs rookie Shane Wright scored 38 seconds into overtime, finding the back of the net for a third straight game while netting his 22nd of the year. Wright, who has developed newfound chemistry of linemate Martin Chromiak, has 36 points (22-14–36) through 37 games this season after being the first overall pick of the 2019 OHL Priority Selection.
• HIGHLIGHTS