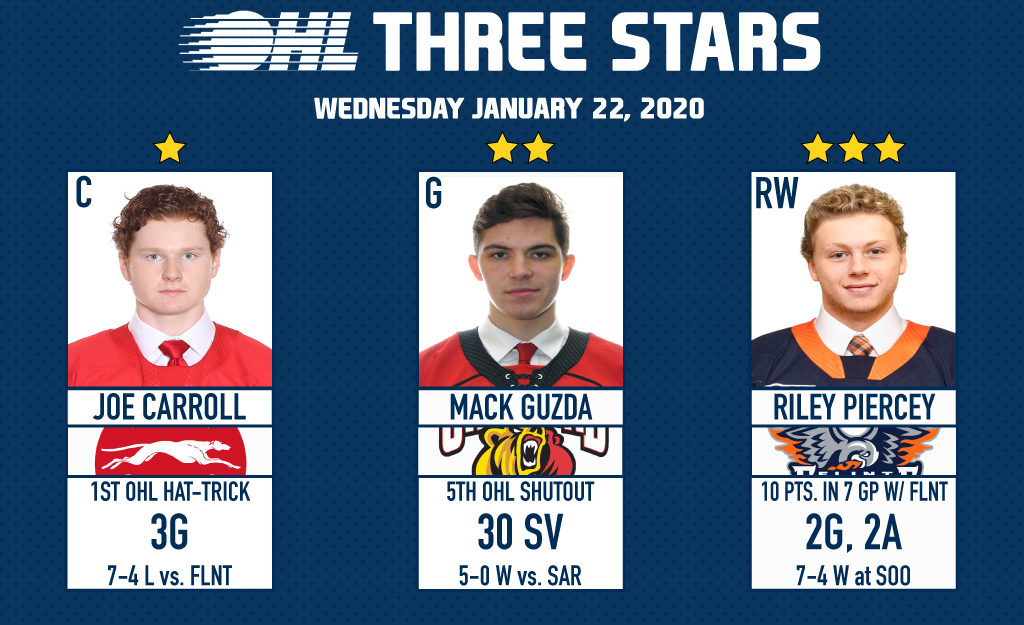 1ST STAR: JOE CARROLL (SOO GREYHOUNDS) – 3G
Third year Soo Greyhounds centreman Joe Carroll collected his first OHL hat trick in his 150th game, a 7-4 loss at the hands of the Flint Firebirds. He scored five minutes into the first period to cut Flint’s lead in half, and scored twice in a row to tie the score 3-3 early in the middle frame. The 18-year-old product of Carp, Ont. has 13 goals and eight assists to his name for 21 points in 32 games this year. Carroll was picked up in the 2017 OHL Priority Selection’s fourth round by the Greyhounds.
• HIGHLIGHTS

2ND STAR: MACK GUZDA (OWEN SOUND ATTACK) – 30 SV SHUTOUT
Mack Guzda stopped all 30 shots that came his way between the pipes for the Owen Sound Attack as they blanked the Sarnia Sting 5-0. This is the 19-year-old’s second shutout of the season and fifth of his OHL career. The 6-foot-5 netminder boasts a 3.17 goals-against average and a .903 save percentage through the first 36 games of his third season with the Attack. A native of Knoxville, Tenn., Guzda was selected in the second round of the 2017 OHL Priority Selection.
• HIGHLIGHTS

3RD STAR: RILEY PIERCEY (FLINT FIREBIRDS) – 2G, 2A
Riley Piercey’s four-point performance helped his Flint Firebirds to a 7-4 road win over the Soo Greyhounds. The 2020 NHL Draft eligible winger scored early in the first period to make it 2-0 and a second time in the game’s remaining three minutes for a 6-4 lead. He also registered assists on Jake Durham’s opening goal and Tyler Tucker’s final goal. Piercey holds a 23-point total (14-9-23) through his second OHL season. He boasts 10 points (5-5-10) in just seven games with the Firebirds since being acquired from the Barrie Colts. The 17-year-old Mississauga product was scooped up 16th overall by the Colts at the 2018 OHL Priority Selection.
• HIGHLIGHTS