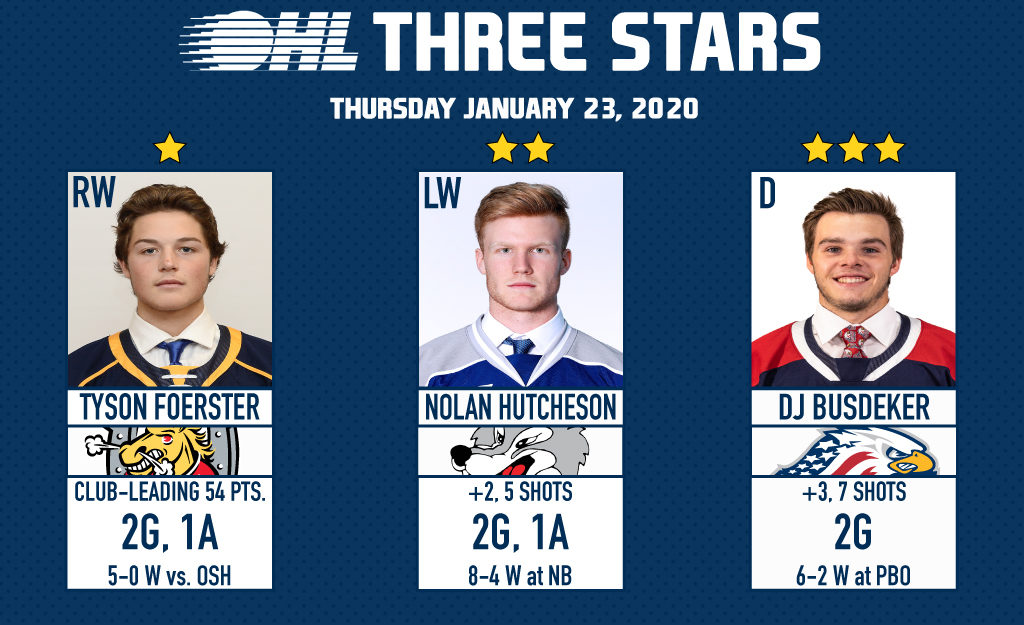 1ST STAR: TYSON FOERSTER (BARRIE COLTS) – 2G, 1A
NHL Draft hopeful Tyson Foerster scored twice and added an assist on Thursday night, guiding his Barrie Colts to a 5-0 win to snap a six-game losing streak. The 18-year-old winger opened the scoring late in the second period then struck again five minutes into the final frame for a 3-0 lead with his 25th of the year. Foerster now boasts 54 points through 41 games in his second year as a Colt. A third round pick in the 2018 OHL Priority Selection, Foerster was recently ranked 41st among North American players in NHL Central Scouting’s Midterm Rankings. He participated in last week’s Kubota CHL/NHL Top Prospects Game where he scored two goals and was named Team White’s Player of the Game.
• HIGHLIGHTS

2ND STAR: NOLAN HUTCHESON (SUDBURY WOLVES) – 2G, 1A
Sudbury’s Nolan Hutcheson registered two goals and one assist in his team’s big 8-4 win over the North Bay Battalion on Thursday night. The 19-year-old native of Kingston, Ont. scored late in the first period to make it 3-1 and then midway through the second for a 6-3 score. The 6-foot-4 winger has 10 goals and 10 assists to his name through the first 39 appearances of his third stint with the Wolves. Hutcheson was a fourth round pick in the 2016 OHL Priority Selection.
• HIGHLIGHTS

3RD STAR: DJ BUSDEKER (SAGINAW SPIRIT) – 2G
Saginaw Spirit defenceman DJ Busdeker scored twice in his club’s 6-2 road win over the Peterborough Petes on Thursday. Busdeker scored shorthanded in the second period and tacked on another late in the third. The 20-year-old from Dexter, Mich. has 32 points (11-21–32) through 45 games this season. He’s in his fourth OHL campaign with the Spirit having spent time both up front and on the back end. He was signed by the club as a free agent in November 2016.
• HIGHLIGHTS