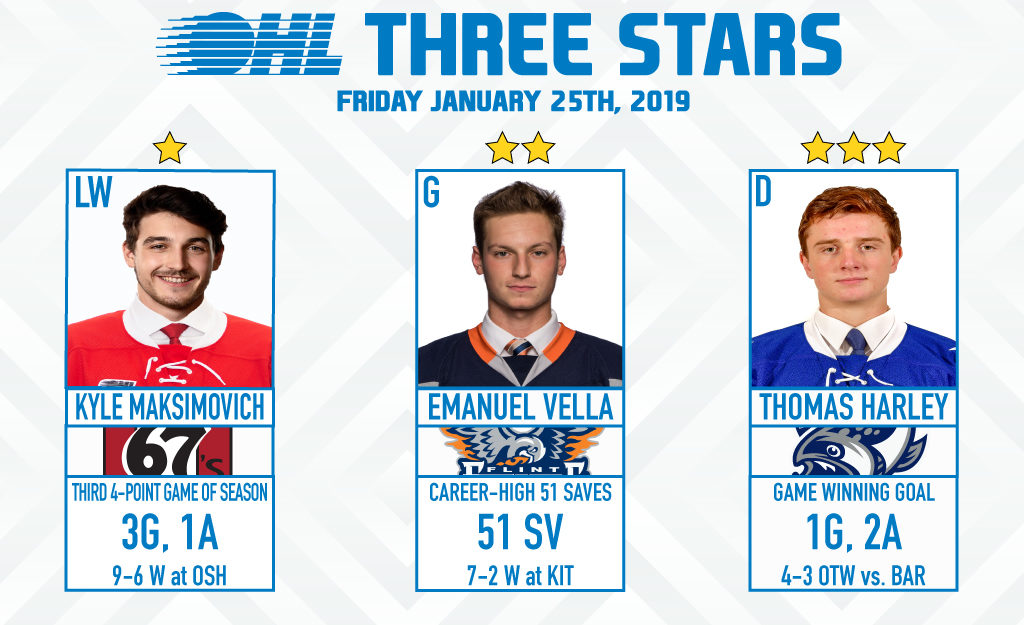 1ST STAR: KYLE MAKSIMOVICH (OTTAWA 67’s):
Overage winger Kyle Maksimovich is making his presence felt with the Ottawa 67’s, putting up a hat-trick and four points in Friday’s 9-6 road win over the Oshawa Generals. Maksimovich excelled alongside fellow newcomer Lucas Chiodo and Mitchell Hoelscher, increasing his season total to 62 points (27-35–62) over 45 games between Ottawa and Erie. The 20-year-old former OHL champion from Hamilton, Ont. is two games shy of the 300-mark on his OHL career and is fast approaching the 300-point plateau. Maksimovich has six points (4-2–6) in as many games since joining Ottawa earlier this month.
• GAME HIGHLIGHTS

2ND STAR: EMANUEL VELLA (FLINT FIREBIRDS):
Veteran netminder Emanuel Vella turned in his best performance of the season, stopping 51 of the 53 shots he faced as the Flint Firebirds skated to a 7-2 win in Kitchener. Vella was kept busy while his team was opportunistic in front of him, scoring seven times despite being outshot 53-29. The 51 saves are a career high for Vella, who improved to 4-19-1-0 on the season with a 4.94 goals-against average and an .875 save percentage. The 20-year-old Toronto, Ont. native attended camp with the New York Islanders this past September.
• GAME HIGHLIGHTS

3RD STAR: THOMAS HARLEY (MISSISSAUGA STEELHEADS):
Draft eligible blueliner Thomas Harley scored his ninth goal of the season 2:08 into overtime, giving the Mississauga Steelheads their fourth straight win with a 4-3 defeat of the visiting Barrie Colts. Harley finished the night with a goal and two assists, increasing his season total to 41 points (9-32–41) over 46 games. The 17-year-old from Syracuse, NY represented Team Cherry at the Sherwin-Williams CHL/NHL Top Prospects Game in Red Deer, Alta. this past week, recording an assist for his team. Harley was the OHL’s top-ranked skater on NHL Central Scouting’s Midterm Draft Rankings released earlier this week. He was Mississauga’s first round pick in 2017.
• GAME HIGHLIGHTS