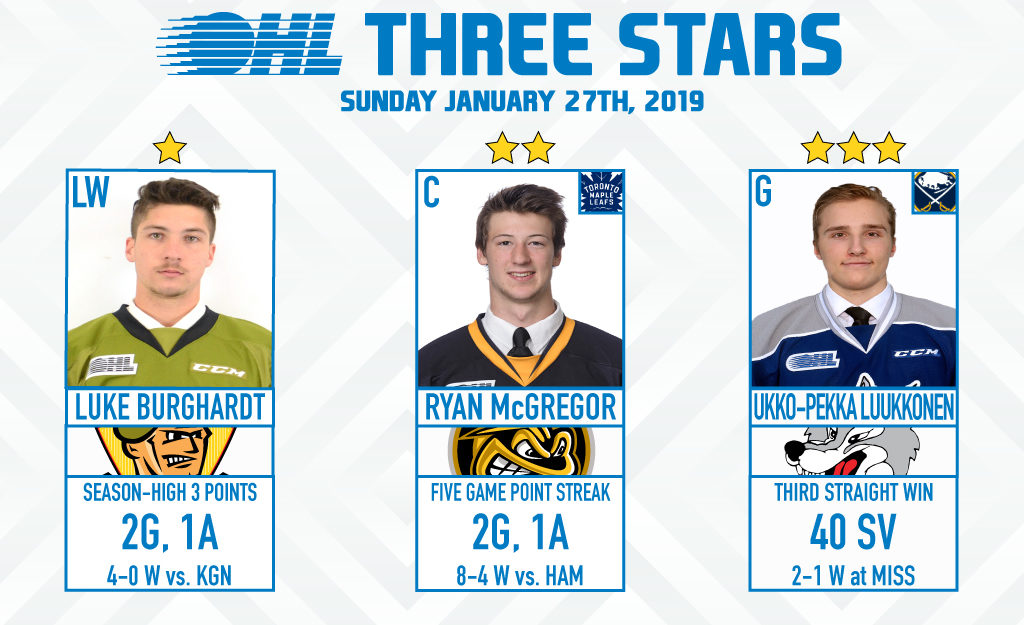 1ST STAR: LUKE BURGHARDT (NORTH BAY BATTALION):
Overage winger Luke Burghardt thrived on a line alongside Matthew Struthers and Justin Brazeau, scoring twice while adding a nice assist as the North Bay Battalion blanked visiting Kingston 4-0. Both of Burghardt’s goals came on assists from Struthers with the first coming on a shot off the rush coming down the middle and the second on a partial breakaway. The 20-year-old from Bowmanville, Ont. had his season delayed due to an offseason injury, but has joined the Battalion and recorded 13 points (3-10–13) through his first 20 games. Burghardt is in the midst of his fifth OHL season after originally being Guelph’s sixth round pick in 2014.
• GAME HIGHLIGHTS

2ND STAR: RYAN McGREGOR (SARNIA STING):
Toronto Maple Leafs prospect Ryan McGregor finished with two goals and an assist in Sarnia’s 8-4 win over the Hamilton Bulldogs on YourTV’s Hockey Day in the OHL. The Sting captain assisted on a Curtis Egert first period goal before scoring early in both the second and third periods. McGregor also finished with a plus-5 rating and went 13-for-18 in the faceoff circle while extending his current point streak to five games. The 19-year-old from Burlington, Ont. has 52 points (18-34–52) over 43 games in this, his fourth OHL season. Originally Sarnia’s second round pick in 2015, McGregor is a graduate of the Burlington Eagles Minor Midget program. He was Toronto’s sixth round pick in 2017.
• GAME HIGHLIGHTS

3RD STAR: UKKO-PEKKA LUUKKONEN (SUDBURY WOLVES):
Buffalo Sabres prospect Ukko-Pekka Luukkonen turned aside 40 of the 41 shots he faced to backstop the Sudbury Wolves past the Mississauga Steelheads 2-1 on the road. The 6-foot-5 Finnish talent helped the Wolves win their third straight game, helping them remain within eight points of first place Niagara in the Central Division. Luukkonen owns a 25-7-1-1 record with a 2.44 goals-against average and a .921 save percentage and a league-leading five shutouts over 34 games. The second round pick of the Buffalo Sabres in 2017 recently won gold with Finland at the IIHF World Junior Hockey Championship.
• GAME HIGHLIGHTS