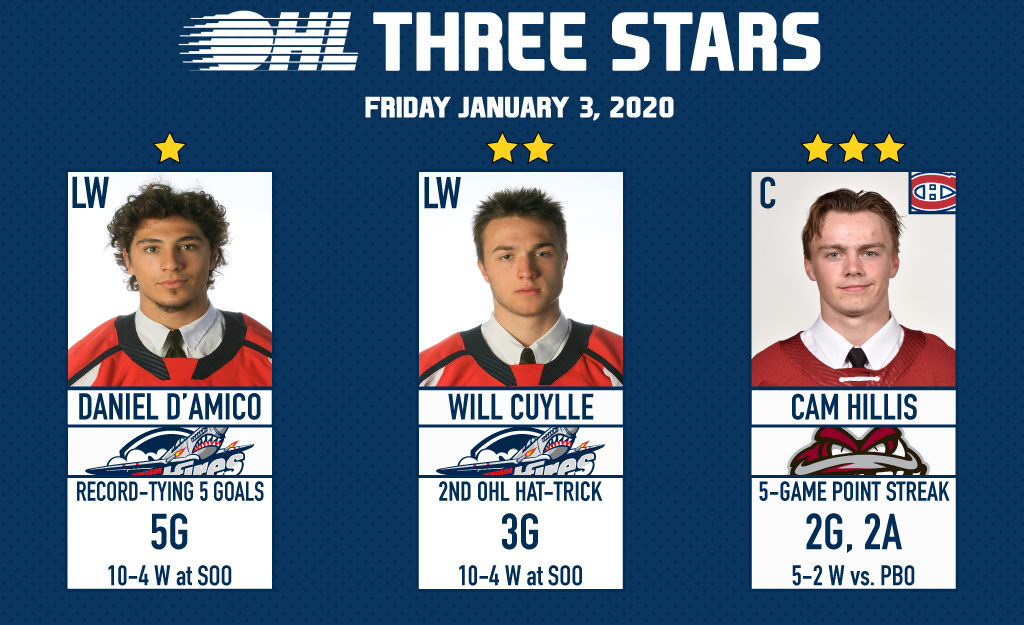 1ST STAR: DANIEL D’AMICO (WINDSOR SPITFIRES) – 5G
Daniel D’Amico found the back of the net five times in Windsor’s 10-4 trampling over the Soo Greyhounds, tying a franchise record for most goals scored by a Spitfire skater in one game. The feat has been accomplished twice in Spits history, the first instance in 1977 by Gerry Leroux. Paul Gagne did it again two years later in 1979. D’Amico’s career-high five-goal performance included his first career OHL hat trick in the opening period of the game to give his team an early 4-1 lead. The third-year centreman also scored late in the second period to bring the score up to 7-3, before he netted the game’s final goal in the remaining minute and a half on the clock. In his third season with the Spitfires, the 18-year-old centreman from Etobicoke, Ont. has totaled 16 goals and 17 assists for 33 points in just as many games played. He’s amassed a total 98 points through 159 OHL games so far.
• HIGHLIGHTS

2ND STAR: WILL CUYLLE (WINDSOR SPITFIRES) – 3G
Windsor Spitfires winger Will Cuylle also put up big points in his team’s 10-4 victory over the Soo, collecting his second career OHL hat trick. The Spitfires sophomore scored just 47 seconds in and then twice in the second period to give Windsor an 8-3 lead. His three goals bring his scoring total up to 26 points (14-12-26) in 34 games midway through his second season. He rounded out his rookie year with 26 goals and 15 assists for 41 points. Cuylle was recently named to January’s Kubota CHL/NHL Top Prospects Game.
• HIGHLIGHTS

3RD STAR: CAM HILLIS (GUELPH STORM) – 2G, 2A
Montreal Canadiens prospect Cam Hillis scored the game winner as the Guelph Storm defeated the visiting Peterborough Petes 5-2. The Storm captain stretched his point streak to five, helping Guelph overcome a 2-0 deficit with the go-ahead goal just beyond the midway point of the second period. Hillis’ fourth different four-plus point game of the season brings his point total to 52 (14-38–52) through 34 games this season. He joined teammate Pavel Gogolev with four points as the Storm remained atop the Midwest Division standings with a 22-8-1-4 record. Hillis was Montreal’s third round pick in 2018.
• HIGHLIGHTS