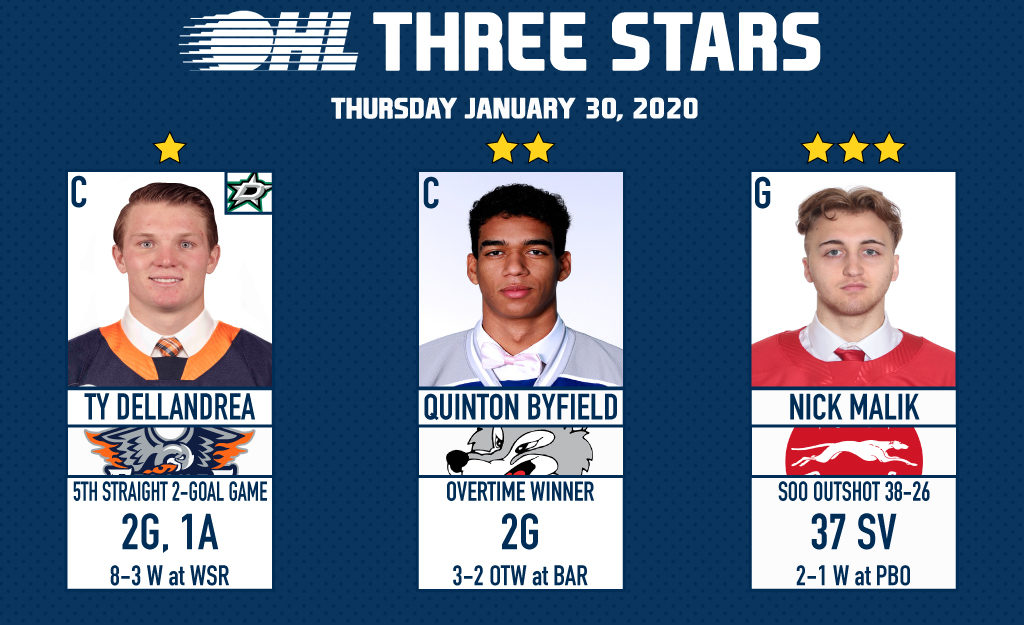 1ST STAR: TY DELLANDREA (FLINT FIREBIRDS): 2G, 1A
Ty Dellandrea continued his two-goal streak, netting a pair of goals for the fifth consecutive time to help push his Flint Firebirds to an 8-3 blowout of the neighbouring Windsor Spitfires. The Dallas Stars first round pick gave the Birds a 4-0 lead before scoring on a penalty shot three minutes later to make it 5-0. Dellandrea also registered an assist on Jack Wismer’s first of two goals on the night soon after for a brief 6-0 advantage. Another three-point night from the 19-year-old Port Perry brings his point total up to 60 (28-32–60) through 36 games in his fourth year with Flint. He’s amassed at least three points in each of his last five games. Dellandrea was picked up fifth overall at the 2016 OHL Priority Selection by the Firebirds, and was selected by the Dallas Stars 13th overall at the 2018 NHL Draft.
• HIGHLIGHTS

2ND STAR: QUINTON BYFIELD (SUDBURY WOLVES): 2G
Top NHL Draft prospect Quinton Byfield found the back of the net twice to earn his Sudbury Wolves a 3-2 overtime victory over the Central Division rival Barrie Colts Thursday night. The 17-year-old scored the tying goal in the third period before netting the overtime winner 31 seconds into the extra frame to secure the win. Byfield now holds a 72-point total (31-41—72) that places him fifth in the OHL scoring race. The 6-foot-4 Newmarket, Ont. centreman has put up a multi-goal performance in his last two games, coming off a hat-trick in last weekend’s tilt with the Soo Greyhounds. Byfield was the first overall pick at the 2018 OHL Priority Selection and holds a second overall ranking among North American players in NHL Central Scouting’s Midterm Draft Rankings.
• HIGHLIGHTS

3RD STAR: NICK MALIK (SOO GREYHOUNDS) – 37 SV
Soo Greyhounds netminder Nick Malik turned aside 37 of the 38 shots he faced to earn his second straight win. The draft eligible netminder helped the Hounds prevail over the Peterborough Petes 2-1 on the road, doing so despite being outshot 38-26. The 6-foot-2 native of Vitkovice, Czech Rep. improved to 2-4 with a 3.45 goals-against average and .895 save percentage over six games. The son of former NHL defenceman Marek Malik recently represented the Czech Republic at the 2020 World Juniors. He was Sault Ste. Marie’s first round (50th overall) pick in the 2019 CHL Import Draft.
• HIGHLIGHTS