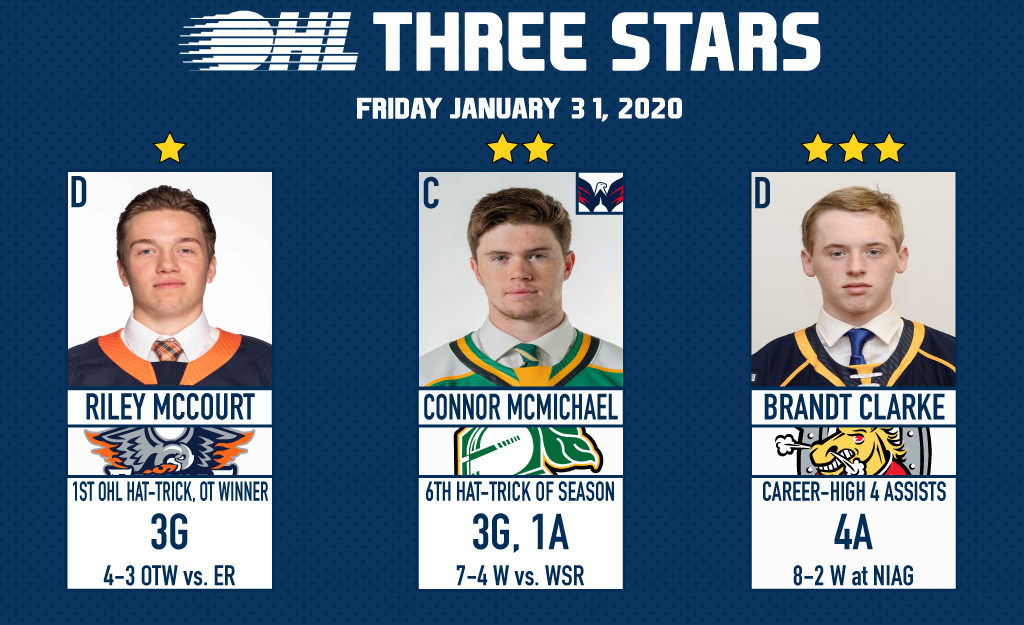 1ST STAR: RILEY MCCOURT (FLINT FIREBIRDS) – 3G
Veteran Flint Firebirds defenceman Riley McCourt scored the OT winner, capping off his first career OHL hat-trick in a 4-3 win over visiting Erie. McCourt, who became the leading scorer among defencemen in Firebirds history last weekend, scored a pair of second period goals before striking for his 16th of the season with 1:03 remaining in the extra frame. McCourt is now up into fourth among OHL defencemen with 50 points (16-34–50) over 47 games. The St. Catharines, Ont. native attended rookie camp with the Boston Bruins back in September.
• HIGHLIGHTS

2ND STAR: CONNOR MCMICHAEL (LONDON KNIGHTS) – 3G, 1A
Washington Capitals prospect Connor McMichael struck for his sixth hat-trick of the season, powering the London Knights to a 7-4 win over visiting Windsor. McMichael finished with four points on the night along with 10 shots on goal and a plus-4 rating. He climbed to fourth in league scoring with 80 points (37-43–80) over 36 games and is on an 11-game point streak that dates back to Dec. 6th. McMichael was Washington’s first round (25th overall) pick in the 2019 NHL Draft. He recently won World Junior gold as a member of Team Canada.
• HIGHLIGHTS

3RD STAR: BRANDT CLARKE (BARRIE COLTS) – 4A
Rookie defenceman Brandt Clarke put up a season-high four assists as the Barrie Colts stampeded past the Niagara IceDogs 8-2 on the road. Three of Clarke’s helpers were primary in nature as he improved his output to 24 points (1-23–24) over 40 games as a 16-year-old. The fourth overall pick of the 2019 OHL Priority Selection, Clarke is a graduate of the reigning OHL Cup champion Don Mills Flyers Minor Midgets.
• HIGHLIGHTS